The Story of the Vagabondage According to Francois-Paul Journe

The story of the Vagabondage begins in 1995 with a Parisian client of mine (reported in certain auction records to be French collector Jean Aube). He had asked me to create a timepiece that was directly projected out of his own imagination.

He asked for a classic watch — very classic — something that would be reminiscent of what Abraham Louis Breguet might’ve created in his day. He did, however, also ask for a twist in the watch. He asked that the watch should tell time by means of vagabond hours. Or what most know better as wandering hours.

He was essentially asking me to come up with a whole new movement. This wasn’t a simply a new watch design — which in itself is a monumental task to embark on — but a movement development, from scratch, does require a substantially greater amount of time and resources.

I asked my client then if he would be open to doing the watch as a series, rather than a one-off pièce unique. Thankfully he was agreeable. He even offered to tap on a contact of his at a rather large watch brand (legend has it that the brand in question was Cartier, hence the tortue case shape) so that the watch might reach a larger audience.

Sadly, the brand in question pulled their interest from the project as soon as I had completed my first prototype. So, off went the watch into my drawer.

Some years later, ahead of their 30th anniversary charity auction, Antiquorum approached me and asked for me to create a special watch to be auctioned off at their anniversary sale. Problem was that when they had asked me, there was only six months left until the date of the auction. 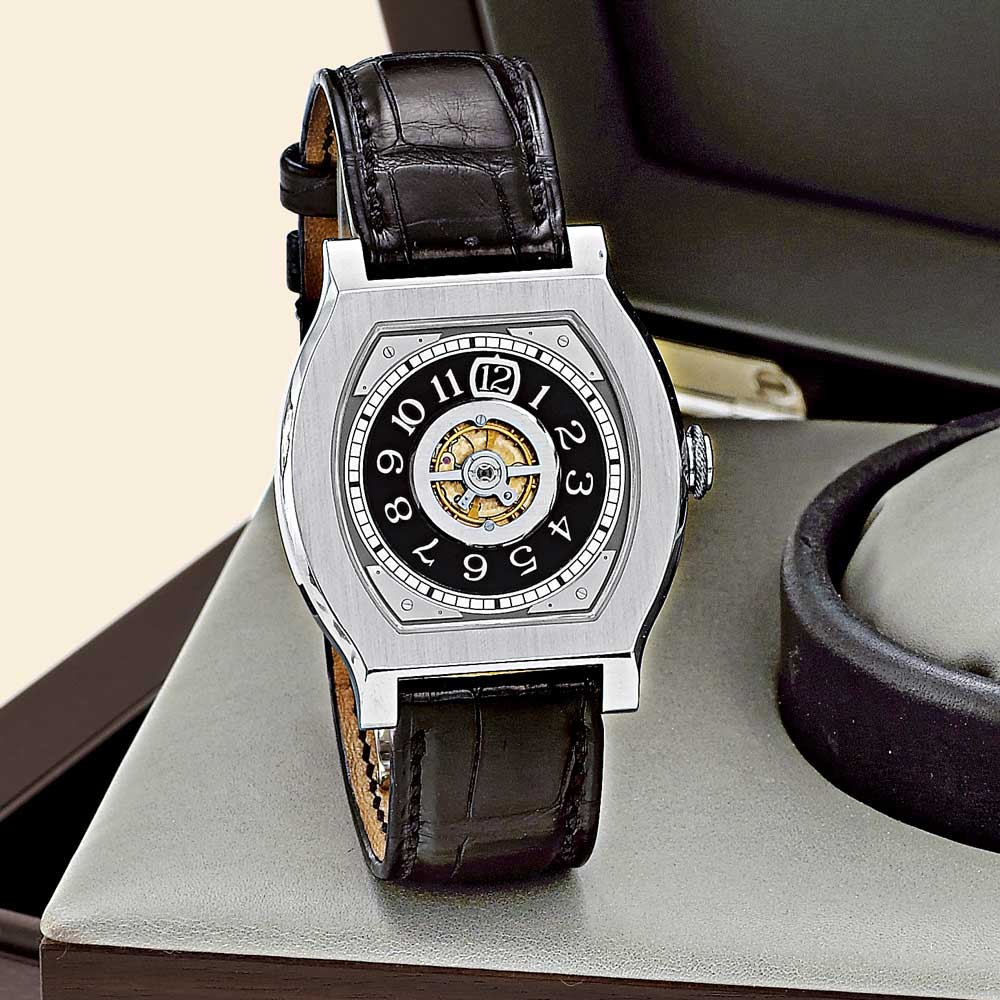 Just six months. Makes you wonder what sort of miracle they were hoping for me to accomplish. Although, if I could make a watch from the ground up within six months that would be kinda cool.

I had to resort to of the many pieces that I had had to put in my drawer for one reason or another. It was then that I felt that this was the right time to bring my watch with the vagabond hours out from my drawer and give it to the world. Thus was born the Vagabondage.

I created three pieces of the watch for the auction. One in red gold, white and, of course, yellow gold in a “tonneau” shaped case. I had never created a watch in such a case shape before. So, it stands apart from everything else I had created until that time. Hence again why the name Vagabondage was so appropriate for the watch. Although, this very fact also made me wonder how the new case shape would perform at the auction and with my collector base.

To my surprise, all three watches sold off at three times their estimates. The watch’s reception amongst collectors, too, was simply phenomenal. So much so that some came and asked, “why didn’t you make one for me?!”

I decided then that I would have to make a small batch of the watch for my collectors. Initially I settled on just 66 pieces. And then a friend of mine comes to me and tells me, “Ah, but François you know I always buy number 69 of your watches. You can’t simply make 66!”

What was I to do? I made 69 pieces. Of course, then I had everyone asking me why 69. And you know exactly why these people were asking [chuckles]. But I had my story and plenty of alibi.

I have to admit, though, that later on I also made a smaller run of just 10 pieces of the watch, in platinum cases set with baguette diamonds. I presented the first set of 69 watches in New York, where by chance I spotted a watch in a particular catalog, which told time by means of jumping hours and minutes. It was then that I thought to myself that perhaps for the second version of the Vagabondage I could do the same, except with a digital display. And thus the concept for the Vagabondage was decided.

It was in 2010 that I was able to showcase my new watch. This time, in order that more collectors might have a chance to own the watch, I did 69 pieces in platinum, 68 pieces in red gold and yet another 10 pieces in platinum set with baguette diamonds.

I was adamant, though, about maintaining the cost of the watch at the same point as the first version’s. So, the larger production number with the Vagabondage II was intentional, also, because it then helped to offset the cost of the new movement’s development.

Because, mind you that on top of figuring out the mechanism for the jumping indications, I also developed the movement with a remontoir d’égalité to ensure better energy dissipation into the watch’s balance than before. It’s not just a new movement, it’s also a better movement. So yes, yet another movement realized from the ground up. This time with jumping hours and seconds digitally displayed. A lot of energy is, therefore, necessary, which explains the double barrels. And to regulate all this energy, I’ve incorporated a remontoir d’égalité again, which rearms every second now.

Keeping to what has now become a tradition, I will produce 69 Vagabondage III watches in platinum and 68 in red gold. I’ve also pegged my prices to that of the earlier versions. This I’m adamant about again. But same formula applies, though, that is the volume of watches sold will help me offset the cost of development of the new movement. 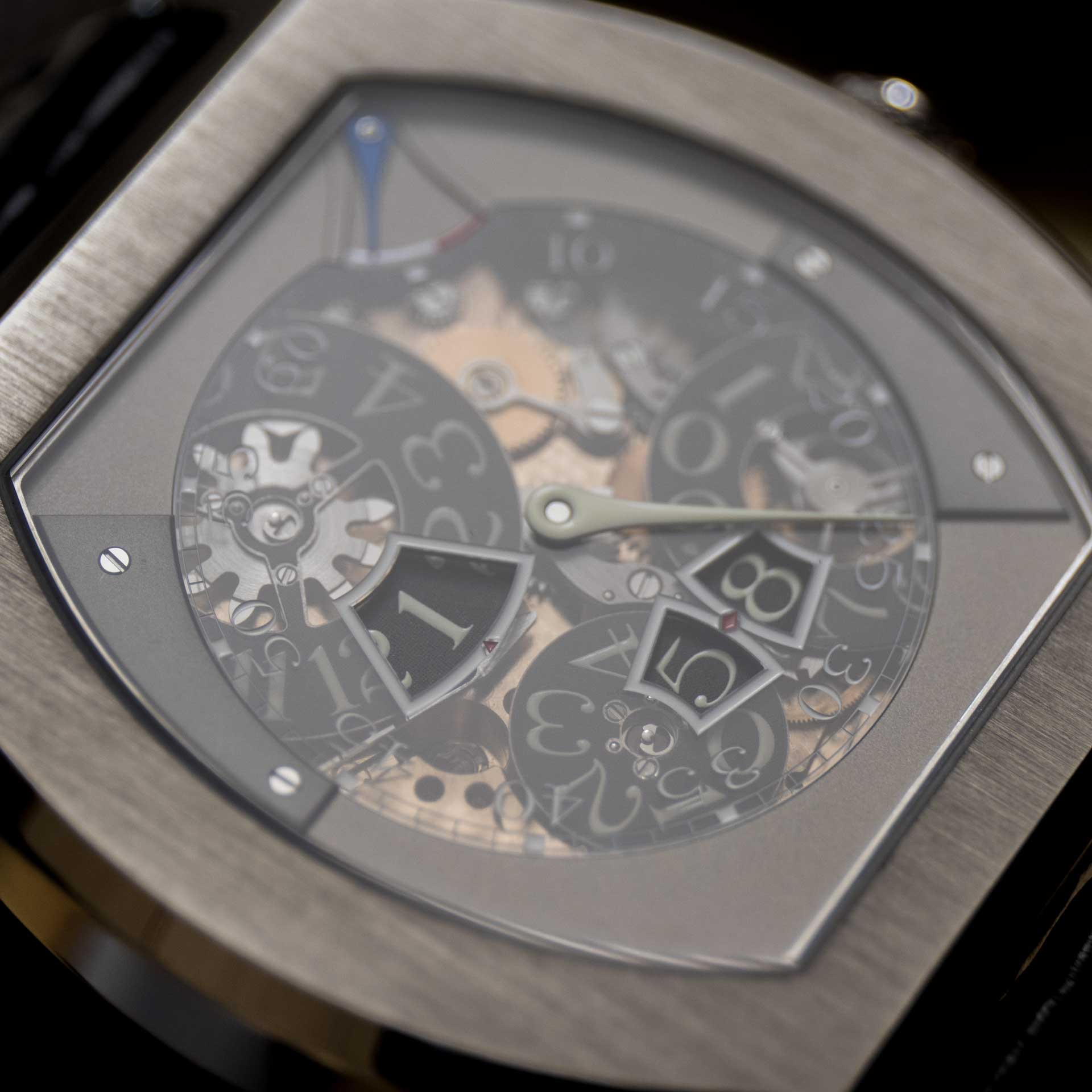 As this is the concluding chapter of the Vagabondage, I wanted to make sure that we went out with a bang. Both for my collectors and, as well, for the legacy of the watch. So, I’ve put together a few plans for how I want my collectors to collect this very special watch.

I’ve also been going around to buy back Vagabondage I and II watches as and when I can find them. What this allows for me to do is, say a new collector comes to me and buys no. 16 of the Vagabondage III and if I happen to have no. 16 from the first and second series, then I can offer this collector the entire trilogy.