Roger Dubuis has for a long while now had a tradition of challenging itself, to forward its watchmaking knowhow, with the use of evermore impressive and unusual materials. Case in point: utilizing Chrome Cobalt Micro-Melt® for the case of the Excalibur Quatuor CarTech Micro-Melt BioDur CCM® (2016) or the Excalibur Spider – Carbon³ flying tourbillon, which was Roger Dubuis’ first watch fully made in carbon: case, caliber and bracelet.

To have our question answered, we turned to the brand’s strategic product director, Gregory Bruttin (who else, right?). Bruttin explains, “Let’s first think about how our carbon watches are made. We start off with sheets of carbon fibre, which we layer and secure using an epoxy.

“From there we place the material into a mold, where it is shaped using the Sheet Molding Composite (SMC) method. Off to the milling machine, then to obtain the raw case. The method used for the Excalibur Twofold is very similar, except that in this case the raw materials are sheets of quartz and yet another epoxy. We load a coloring agent into the epoxy itself that gives the resulting material its pristine white color.”

Bruttin makes it sound simple enough now, but here is a watch that is at least two years in the making, just in the matter of research involved in formulating Mineral Composite Fiber. He shares, “The challenge was to find the right composition for the epoxy. We wanted to be extremely careful about this because we didn’t want to end up with a material that would be sensitive to UV in the long run and turn yellow from its pristine white color.

“We spent two years trying to find an appropriate epoxy from the many varieties that already exist in various industries. But none where suitable. In the end, we had to resort to working with a partner to formulate an epoxy that is now a development of our own.”

Therein we have number one of three world premieres contained within the Excalibur Twofold that Roger Dubuis can make claim to. What’s number two then?

Explains Bruttin, “For the movement itself we have put Super-LumiNova on the angles of the movement’s bridges. Normally in order to apply Super-LumiNova we need a contained space within which the material can be held when applied.

“There are no containing borders on the angles of the movement bridges. In order to overcome this challenge, we had to develop a whole new technique, again with the help of a partner. The solution we have devised is very interesting to me, and we’re really enjoying playing with light to showcase the mechanisms of our watches.”

World premiere number three is a little unexpected, but Bruttin explains that it’s to do with the strap where the brand has for the first time incorporated Super-LumiNova into the material of the strap. Says Bruttin, “we’re using a specific Super-LumiNova here, which we put directly into the rubber of the strap before molding it.” All of this and still the watch manages Roger Dubuis’s mandate for every watch bearing the Geneva seal.

Now the three world premieres aside, what is perhaps most interesting is still the use of this new material, Mineral Composite Fiber. Other than the fact that it is what forms the case of the watch, Bruttin made a passing mention that the top surfaces of the otherwise brass bridges of the watch – the star over the barrel, etc – all have a thin layer of Mineral Composite Fiber over, which gives the whole watch its seamless pristine white.

So, in closing, we asked Bruttin if it might be possible to actually form the whole movement of the watch in Mineral Composite Fiber, much like they’ve accomplished for the Excalibur Spider – Carbon³ flying tourbillon. To which he laughed out loud and said, “it certainly has all of the physical qualities necessary for us to make our delicate Excalibur movements.”

Guess it’s not hard to imagine then what is already cooking in Bruttin’s head.

45mm in Mineral Composite Fiber with titanium case back; water resistant to 30m

Rubber with camo pattern on top treated with Super-Luminova 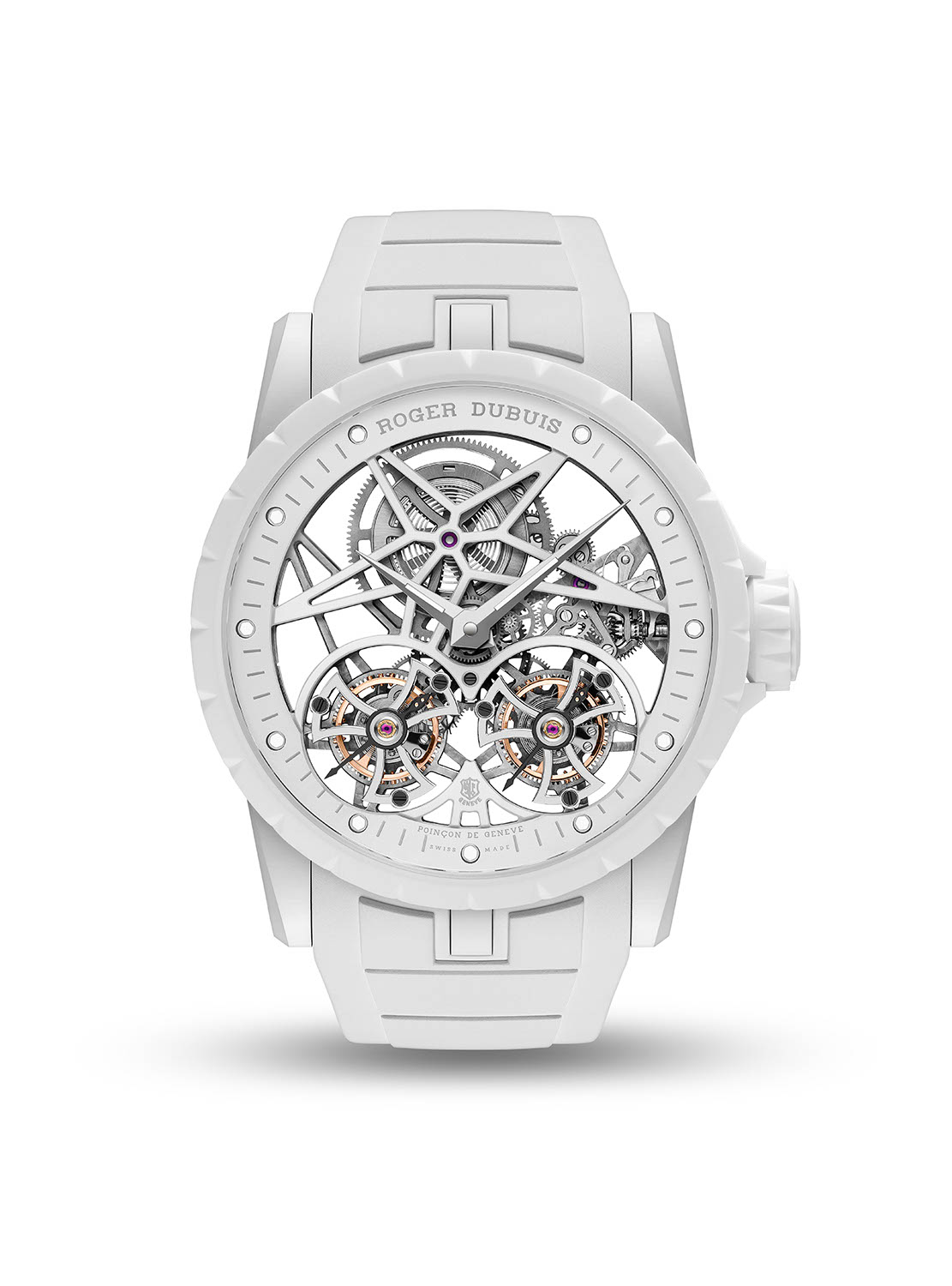