Omega is a name associated with many a great thing – the glamour that is James Bond, the thrill of space exploration, the precise timing that is the Olympics, and the technical triumph in its co-axial escapement and anti-magnetic watches. Maybe not as well publicised as the other achievements is the fact that Omega is one of the first to develop a tourbillon wristwatch back in the 1940s and much later, the first to develop a central tourbillon that was introduced in the De Ville collection in 1994.

This 2020 marks yet another first. The new Omega De Ville Tourbillon Numbered Edition, is the first tourbillon to be Master Chronometer certified – and! – it is also anti-magnetic, capable of resisting magnetic fields up to 15,000 gauss. Need comparison? 15,000 gauss is more than 15 times more resistant than a Rolex Milgauss, and two times the IWC Ingenieur references from the 1980s and early ’90s that once held the claim of being the “most anti-magnetic watches” in the world.

The first tourbillon wristwatches can be traced back to the ’30s and ’40s, the first prototypes are typically credited to French watchmaker LIP, as well as Omega, who in 1947, created a number of tourbillon movements called the Calibre 30I, to run in the “wristwatch” category of the Geneva, Neuchatel and Kew-Teddington Observatory trials. These movements were only 30mm in diameter and unconventionally, rotated once every 7.5 minutes as opposed to the more usual 60 seconds. The movements, while not particularly aesthetically finished, were technically the best of the best; 12 Calibre 30I movements were submitted for the trials between 1947 and 1952, and in 1950 was awarded with the highest results in that category up to that point. It was previously believed that these movements were only created for the Observatory trials and when Omega rediscovered seven of the 12 movements in 1987, the company had them entirely rebuilt then cased in gold and silver, offering them only to a select group of collectors.

Recently, further information, along with a prototype watch, was uncovered that pointed to a 13th movement, and the initial plans to turn the Calibre 30I tourbillon into a production wristwatch. It was a remarkable discovery, cementing Omega’s place in tourbillon history and the pre-series model with the 30mm tourbillon movement sold at Phillips Auction in 2017 to the tune of CHF1,428,500.

The second the @omega Tourbillon 30 I was hammered, becoming the most expensive Omega wristwatch to have been sold at auction at CHF 1,428,500 (with buyer’s premium).

This information is important because it wasn’t until 1994 that Omega produced its first commercial tourbillon wristwatch. You may recall that Audemars Piguet, by now known as a prominent complications watchmaker, only debuted its self-winding tourbillon calibre 2870 in 1986. Tourbillon wristwatches didn’t gain massive popularity until the early 2000s, when the ability to offer a tourbillon became the benchmark for haute horlogerie. Any brand worth its salt began clamouring to develop them.

The original De Ville Central Tourbillon takes some inspiration from the 30mm automatic movement, but aesthetically looks completely different from any tourbillon wristwatch at the time by virtue of placing the tourbillon right in the middle, as opposed to the periphery. 1994 was Omega’s 100th anniversary, and they wanted to revisit its tourbillon history and produce a special high watchmaking timepiece, but in a distinctly unapologetic Omega way. The project, codenamed Project 33, began in 1991 and was undertaken by Maurice Grimm and André Beyer, who developed the movement together with the Omega technical office. In less than three years, the new watch was born. The new tourbillon wristwatch takes inspiration from three of Omega’s past achievements, including the “Les Montres des Sables” pocket watches, the Dinosaure and of course, the Calibre 30I that were made for the observatory chronometer trials.

The tourbillon in the centre is inspired by the 1985 “Les Montres des Sables” watches by Dominique Loiseau, a collection of six unique complicated pocket watches, decorated with a sand dunes theme, featuring a floating tourbillon cage in the centre of the movement.

The hands, which posed an issue as the central tourbillon now occupied the space where the hands are normally fixed, found its solution in Omega’s “Dinosaure” watch from the 1980s. The Dinosaure was a quartz watch but it was ultra-thin at only 1.42mm, utilising the case back of the watch to support the driving gears for the hands. The Central Tourbillon adopts the same concept, the indicators for the hours and minutes are superimposed on two sapphire discs which are driven by gearing under the case bezel.

And finally, like the Calibre 30I, the movement on the 1994 Central Tourbillon, the calibre 1170, is also 30mm. But unlike the Calibre 30I, the tourbillon rotates once every 60 seconds, allowing the watch to display seconds. This would prove essential because later in 2004, Omega successfully has its tourbillon wristwatch COSC certified for the first time – yet another laudable achievement.

From the archives: The Evolution of Omega’s Anti-Magnetic Aqua Terra 15,000 Gauss

Omega outdid most every other brand by coming up with the co-axial calibre 8508 in 2013 that was anti-magnetic to 15,000 gauss. The following year, Omega introduced eight new gauss calibres to several of its collections, including the Seamaster 300 Master Co-Axial, the Seamaster Aqua Terra Master Co-Axial and the De Ville Trésor. Not to mention is that in 2017, Omega tested a prototype of the Seamaster Aqua Terra to an incredible 160,000 gauss. That watch now resides in the Omega Museum.

And now, Omega has made its central tourbillon wristwatch anti-magnetic to 15,000 gauss too.

The release of the new De Ville Tourbillon Numbered Edition is therefore extremely significant because it marks several occasions. First, that it is Omega’s first ever Master Chronometer certified manual-winding central tourbillon wristwatch. The METAS certification is extremely stringent and actually means that the watch is certified twice, as watches need to be first certified by COSC before it is tested by METAS, which consists of eight tests related to quality, durability and accuracy.

Second, is that Omega’s watchmakers have managed to craft a tourbillon cage that will keep rotating unaffected even under a magnetic field of 15,000 gauss. Two incredible feats in a tourbillon creation indeed.

The Co-axial Chronometer Calibre 2640 can be viewed through the sapphire crystal case back, where the two mainspring barrels are prominently displayed. They are linked by an arc that serves as the three-day power reserve indicator. The bridges and the mainplate are made from 18K Sedna gold (Omega’s proprietary coppery rose gold) and have been hand-bevelled for a decorative finish. Taken out from its case, the movement’s mystery hands are solved. The driving gears for the hour and minute indicators can be seen on the periphery of the movement, positioned at 1 and 2 o’clock. The three other protrusions on the dial side of the movement serve as guides for the two rotating discs. An additional point to note is that while the 1994 version was a self-winding model, the latest 2020 model is hand-wound.

The watch, 43mm in diameter, is cased in white 18K Canopus gold, while other elements, like the sun-brushed dial, the lugs, bezel and caseback are juxtaposed in 18K Sedna gold. And then, the final touch that pulls the watch firmly into modern day aesthetics: the highly polished black ceramised titanium of the tourbillon cage. Each timepiece is handcrafted by Omega’s small team of horologists at its Atelier Tourbillon, requiring approximately an entire month of dedicated work to complete.

Omega may not be the first name that comes to mind when you think of tourbillons, but at this moment, it’s definitely having the last word 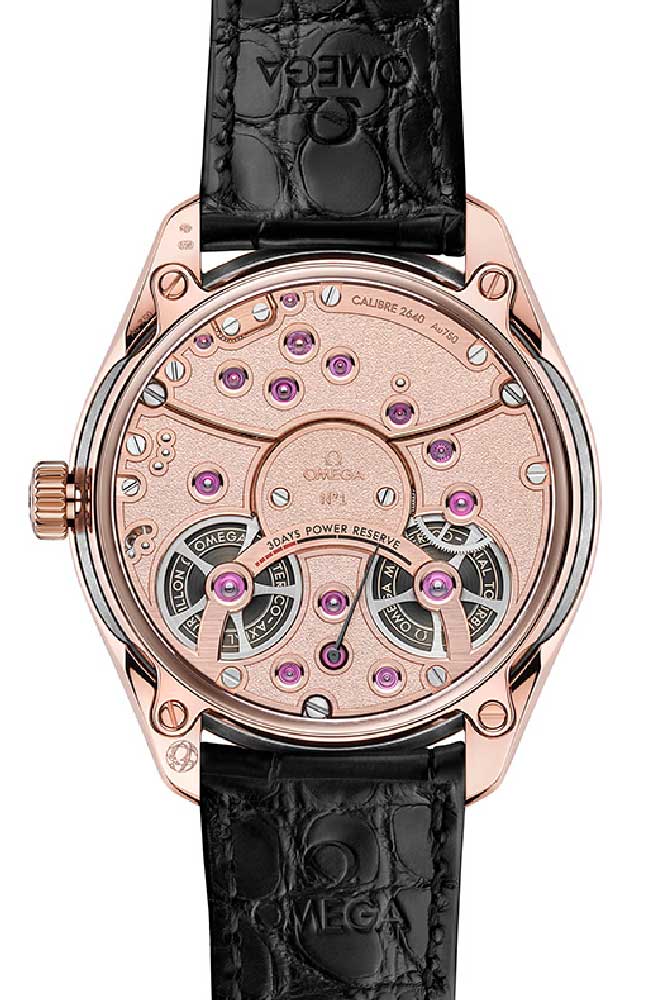