Each year, as a brand, the artistic director of Hermès, Mr Pierre-Alexis Dumas, forges a theme that encapsulates the philosophy of the brand’s products for the year, across all segments of the maison, from leather craft to scarves, to homeware to watches. This year, the theme the brand is embracing is “Innovation in Time”. That idea cascades through each of Hermès’ watch lines, from H Hour to Arceau to Slim d’Hermès to Cape Cod. Without further blathering, let’s jump right in to discover all that the brand has created.

The Arceau is perhaps the most definitive of Hermès watch designs. Developed by Henri d’Origny in 1978, with its horseshoe-styled lugs and almost non-existent bezel, the simplicity of the case is as magnificent as it is elegant. The line has hosted some of the best complications that Hermès has created over the years, from Le Temps Suspendu to high complications and artistic creations. This year, additional Arceau creations fill Hermès’ product lineup.

The L’Heure de la Lune is a continuation of the complication that was unveiled at SIHH 2019. The watch, which features a Pegasus print from Dimitry Rybaltchenko and a double Moon complication designed by Jean-François Mojon and the team from Chronode, made waves on the watch front by taking the customary moonphase display and centering the entire watch around that complication, rather than the reverse.

Two satellites that indicated the time and the date, mounted on a central arm, moved with the change of the days to indicate the waxing and waning of the Moon on both hemispheres. The design was ingenious, a 117-component gearing running over the H1837 in-house caliber for a stunning moonphase display that took over the dial, rather than hide within a counter.

The artistic director of La Montre Hermès, Philippe Delhotal, continues to explore the “time in the sky” with new variations of L’Heure de la Lune, in lunar, Martian and Black Sahara meteorite dials. What does that mean? It refers to the meteorite that’s used on the dials of these limited edition models, which range from 36 pieces (lunar meteorite) to 30 (Black Sahara) to 2 (Martian meteorite).

What are their differences, you ask? As meteorite is comprised of different kinds of rock material, which, as they superheat while entering Earth’s atmosphere, result in different kinds of textures and colors, and also due to natural ageing, the texture and color of each dial is distinct, and even more so between different types of meteorite used.

Due to the differences in composition, these dials differ in color, material and density and Hermès has complemented that with variant dials. The lunar meteorite model has the time and date displays on gradated, textured brown counters, with blued hands, the result of which is a heightened presence of the Moon on the cratered, complex mix of stone types from the lunar meteorite display.

The Martian meteorite model has a moss green tone (you’d think it would be red or brown, but no) that’s matched by the alligator leather strap, on white-as-porcelain dials that again emphasize the negative space of the dial. The Black Sahara model is the most discreet of the lot, almost basalt-like in appearance and emphasizing the monochromatic presence of the watch.

Alligator leather strap with matching tone to the dial. 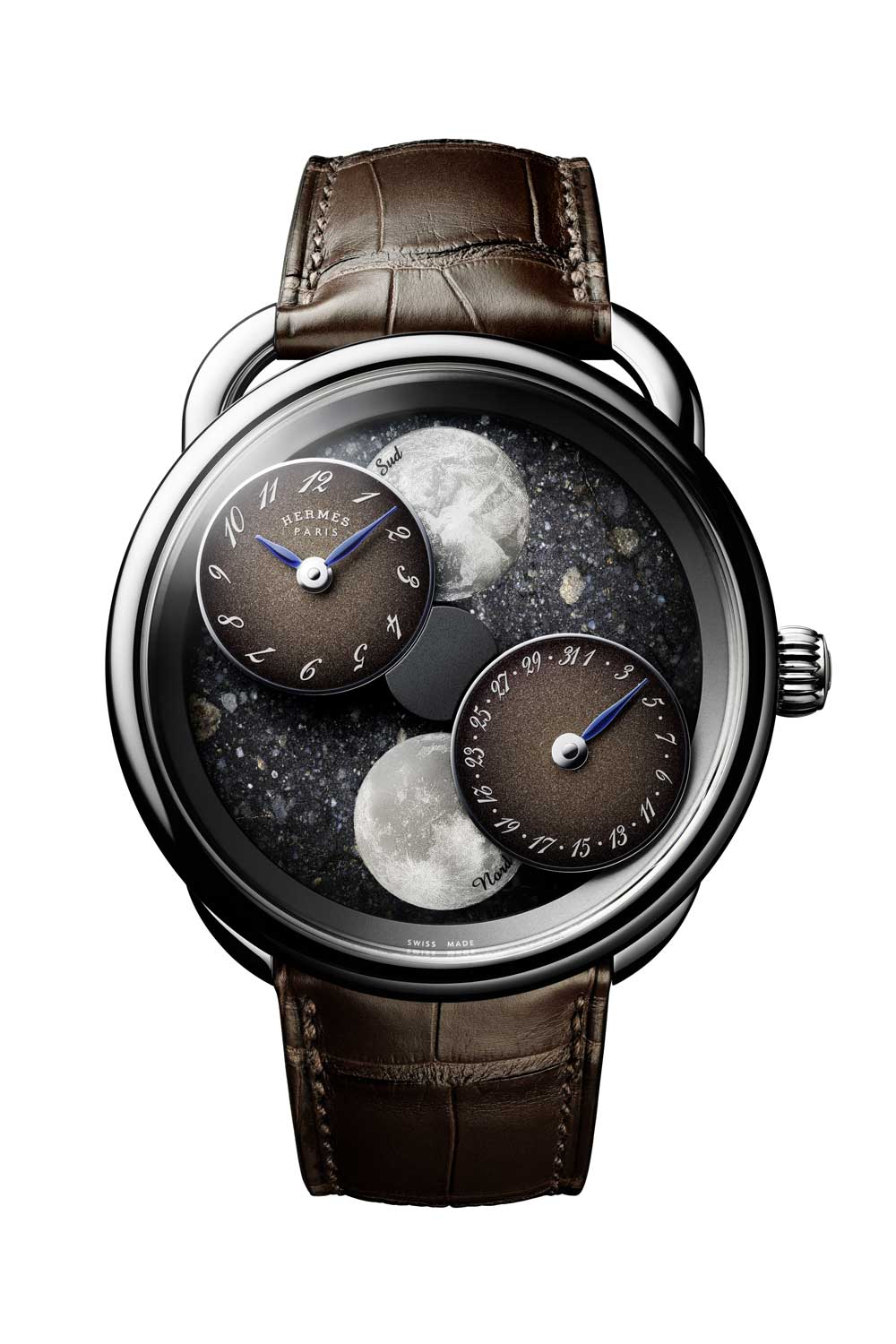 In addition to the already announced Arceau Squelette, Hermès is also presenting an artistic model, the Cheval Cosmique, once again inspired by a horse from the brand’s archive. This particular silhouette stems from Émile Hermès’ private collection, which was developed by artist Gianpaolo Pagni and combined with graphic flowing lines. The drawing is then hand engraved in relief, before combining with a dial in aventurine or mother-of-pearl with enamel.

The crafting of each dial takes over a week to complete, starting with an engraver carefully carving out the waves and horse on gold plates that are less than a centimeter thick. The waves combine hand engraving with lacquer coatings to add to their vivid presence, and these are then laid on a plate, before fitting the aventurine, or the enamel and mother-of-pearl to fill in the rest of the dial.

Both versions of the watch are released in limited editions of 24, with the aventurine model encased in white gold and giving the regal horse on undulating waves a grand, almost mythical presence as if it were Sleipnir, the horse that the Norse god Odin rides.

The enamel and mother-of-pearl dial model comes in a diamond-set white gold case, styled such that the horse appears to be running around the dial, on a track of sorts. Leave it to Hermès to come up with an ingenious way of incorporating art on the display. The models start from USD 54,500.

Alligator leather strap with matching color to the dial 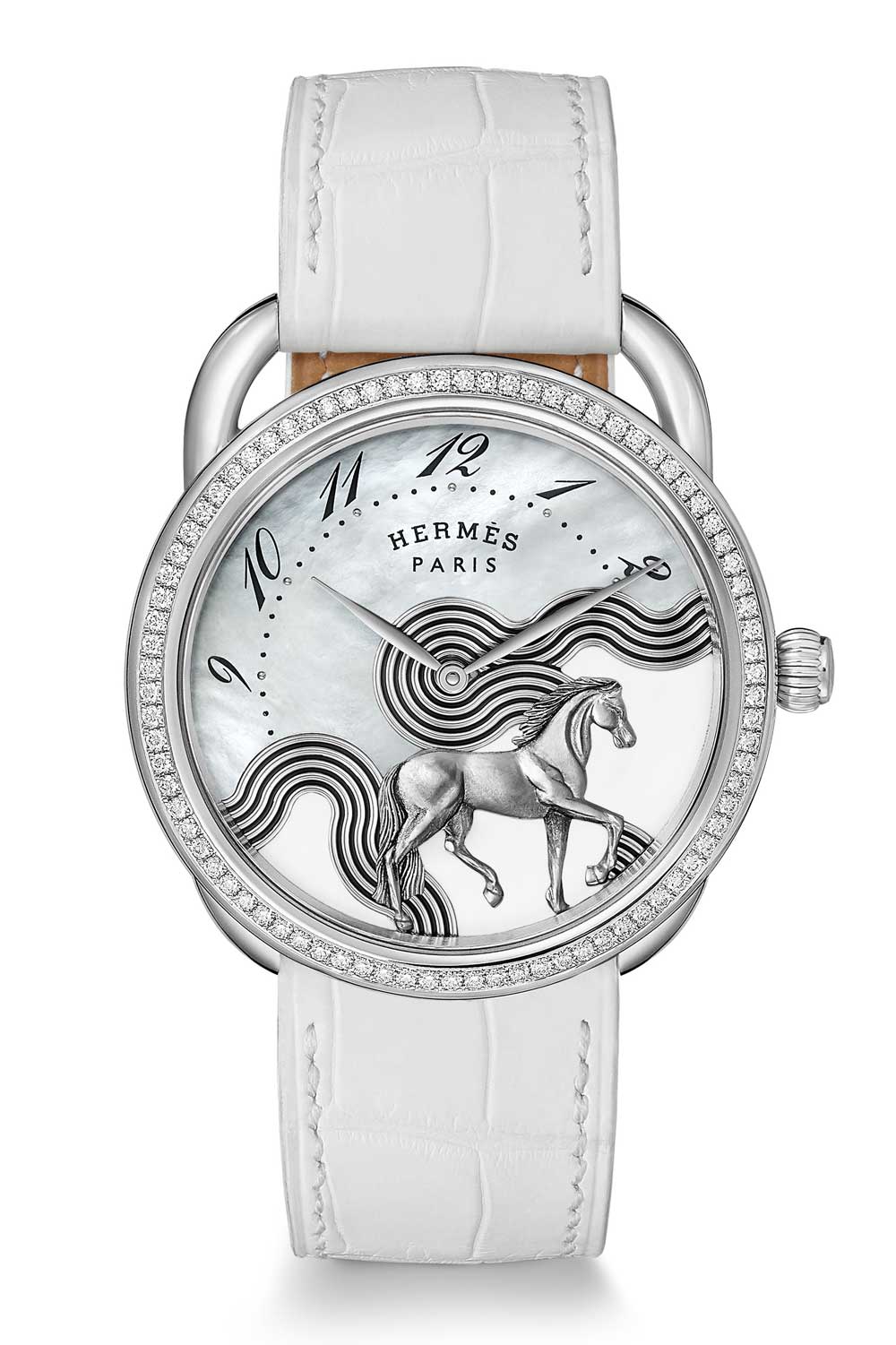 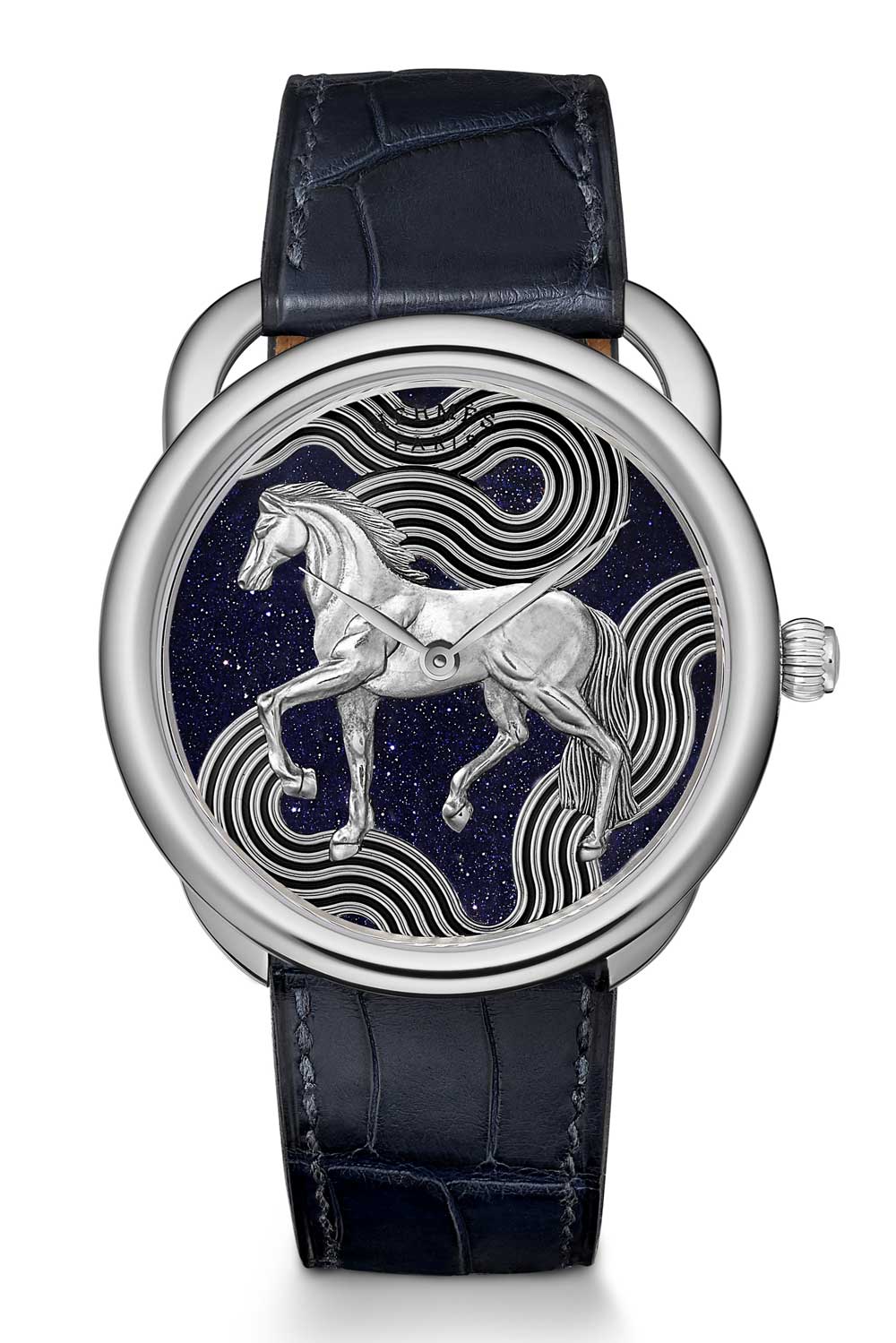 Hermès has always paid plenty of attention to its female audience when it comes to watchmaking, and early on developed lines that were dedicated to the fairer gender, with emphasis on a context with Hermès’ other product lines.

This year, the H Hour collection is introduced in a black lacquer and rose gold model that reminds one of the H belt buckles made in the same style some time ago. The glossy black lacquer contained within the rose gold frame and the three-dimensional dial, again painted in lacquer and polished to a reflective shine, exudes a discreet and modern sophistication that’s simple, and classy. Paired with an alligator leather strap, it looks perfect for the modern day. The watch is priced at CHF8,500.

Along with the H Hour model, a Cape Cod in Martelée or hammered metal textured case, is also being presented. The hammered metal motif has been used before on various Hermès products, and the Cape Cod, which is itself based on the designs of the anchor chain link, is a perfect vehicle to carry this technique.

The hammering of the case, done in gentle uneven strikes, gives rise to a patina and texture on the case. The dial itself bears the same treatment, followed by a coating with a layer of translucent lacquer in shades of gray to black to prevent ageing or oxidation. It also results in an unorthodoxly beautiful design, one that gives the watch a raw, elegantly unfinished style. The watch is priced at USD 3,625.