Since establishing his company in 1999 with the motto “Invenit et Fecit,” Journe has continually made it his mission to invent original designs for his timepieces, eschewing the typical aesthetics that we associate with certain complications like the chronograph or the perpetual calendar.

The Quantième Perpétuel, launched in 2013, was F.P. Journe’s second perpetual calendar, and to many watch connoisseurs, possibly one of the most interesting and distinct perpetual calendars today. The watch does away with the typical busy sub-dial display and multiple pushers we’re used to seeing, and instead offers a concise and easy-to-read calendar display. The day and month are shown in two apertures at 12 o’clock, while the oversized date is displayed in two windows at 6, a hallmark of F.P. Journe watches. It was all well and good except for one detail — the first generation dial came with a decorative steel ring around the centre dial that garnered some mixed reviews.

The new model launched in 2020 this year does away with the steel ring, which gives the watch an even cleaner and frankly, a much stronger aesthetic. In place of the ring, the centre portion of the silver dial is now decorated with the engine-turned cloys de Paris pattern. It’s worth noting that even though the steel ring is gone, the centre dial is still an atypical oval shape; it’s a quirky design feature, for sure, but it works. The numerals 3 and 9 are sized smaller to account for the oval centre.

Apart from the silver dial, F.P. Journe has also produced a blue dial version that is exclusively available in boutiques only. The blue makes the timepiece look more modern than ever before. It’s not often that Journe will bestow a matte blue dial on us, so this is one special treat.

The Basics of the Quantième Perpétuel

As the ultimate perfectionist, Journe ensured that the Quantième Perpétuel came with instantaneous jump, meaning that all the indicator windows would change instantly, at the exact same time. The mechanism required to do this is an ingenious system Journe designed that would accumulate energy and release it immediately when the date, day or month changed, then slow down at the end of its route. In favour of legibility and an uncluttered aesthetic, Journe sacrificed the moon phase — a beautiful complication, for sure, but not actually a complication we use on a daily basis.

Perpetual calendars are also known to be finicky to use, it’s not the easiest complication to adjust, so Journe really prides himself over the ease of use of the Quantième Perpétuel. In the Quantième Perpetual, there is just one crown, no pushers. All corrections are made via the three-position crown, except for the manual correction of months, which is done with a protected and hidden corrector lever beneath the lugs at 1 o’clock, meaning the watch could go without adjustment using special tools for at least four years. The leap year indicator is shown in the centre of the dial, with the years 1, 2 and 3 in black and the leap year, 4, in red.

The Quantième Perpétuel comes with a self-winding movement in 18K red gold, yet another hallmark of all F.P. Journe’s precision chronometers. The basis of the calibre is the 1300.3 used typically in the Octa line. The movement also features an off-centre rotor in 22K red gold, in order to open up the movement even more for our viewing pleasure. Lastly, the movement comes with 160 hours of power reserve, 120 hours of which are chronometric and can be tracked on the retrograde indicator on the dial. The massive power reserve is possible due to the autoblocant ball bearing system in the movement, which forces the movement to wind only in one direction. This is extremely good news for collectors — owning a perpetual calendar only to have it stop running and having to reset everything manually is the ultimate irony.

The F.P. Journe Quantième Perpétuel equipped with a new guilloché silver dial with applied white gold numerals and apertures is now available in 40mm or 42mm. There is also a blue-dial boutique exclusive version. Both variations are available in either platinum or 18K 6N red gold. The watch is exclusively available through F.P. Journe boutiques and Espaces only. Price TBC. 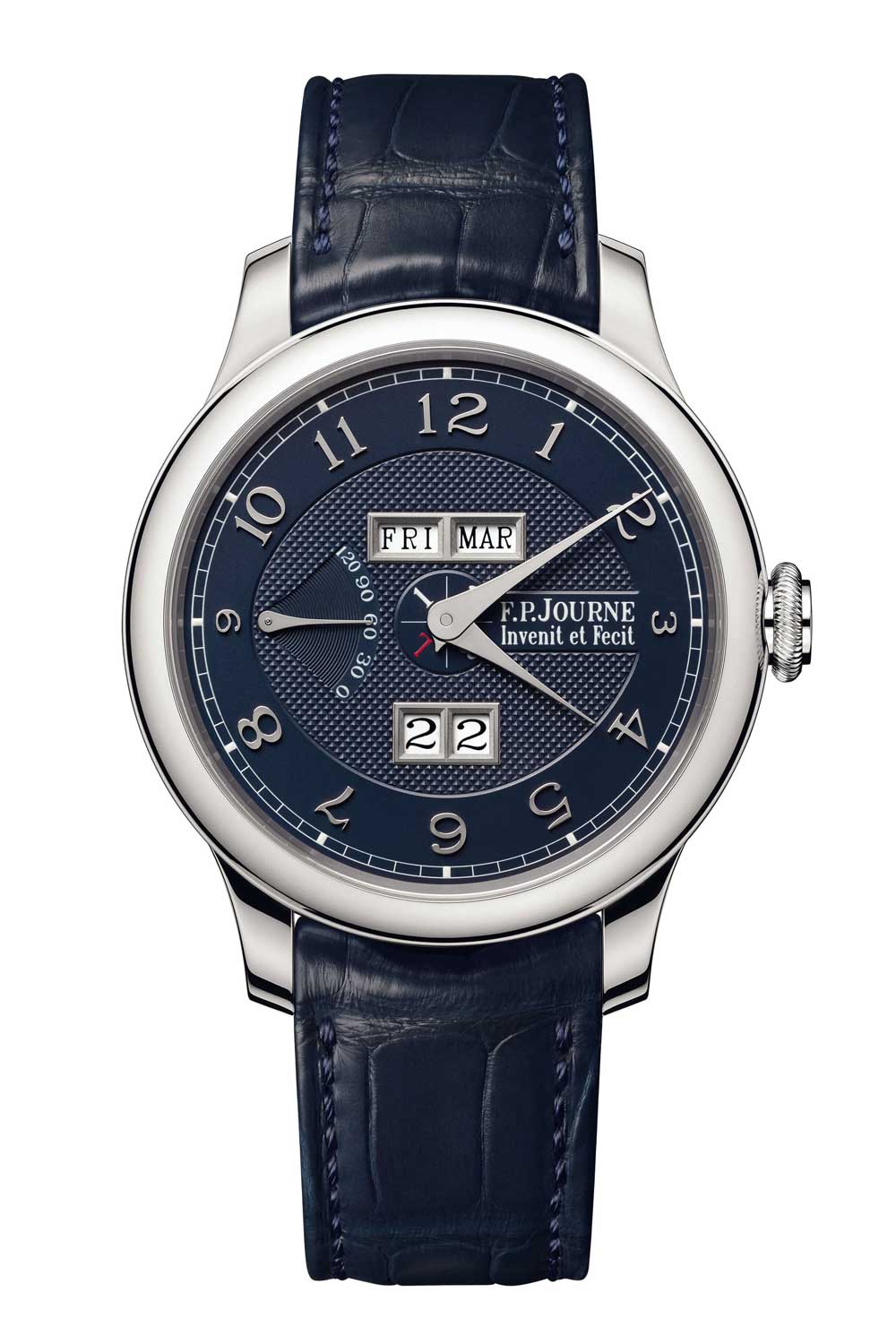 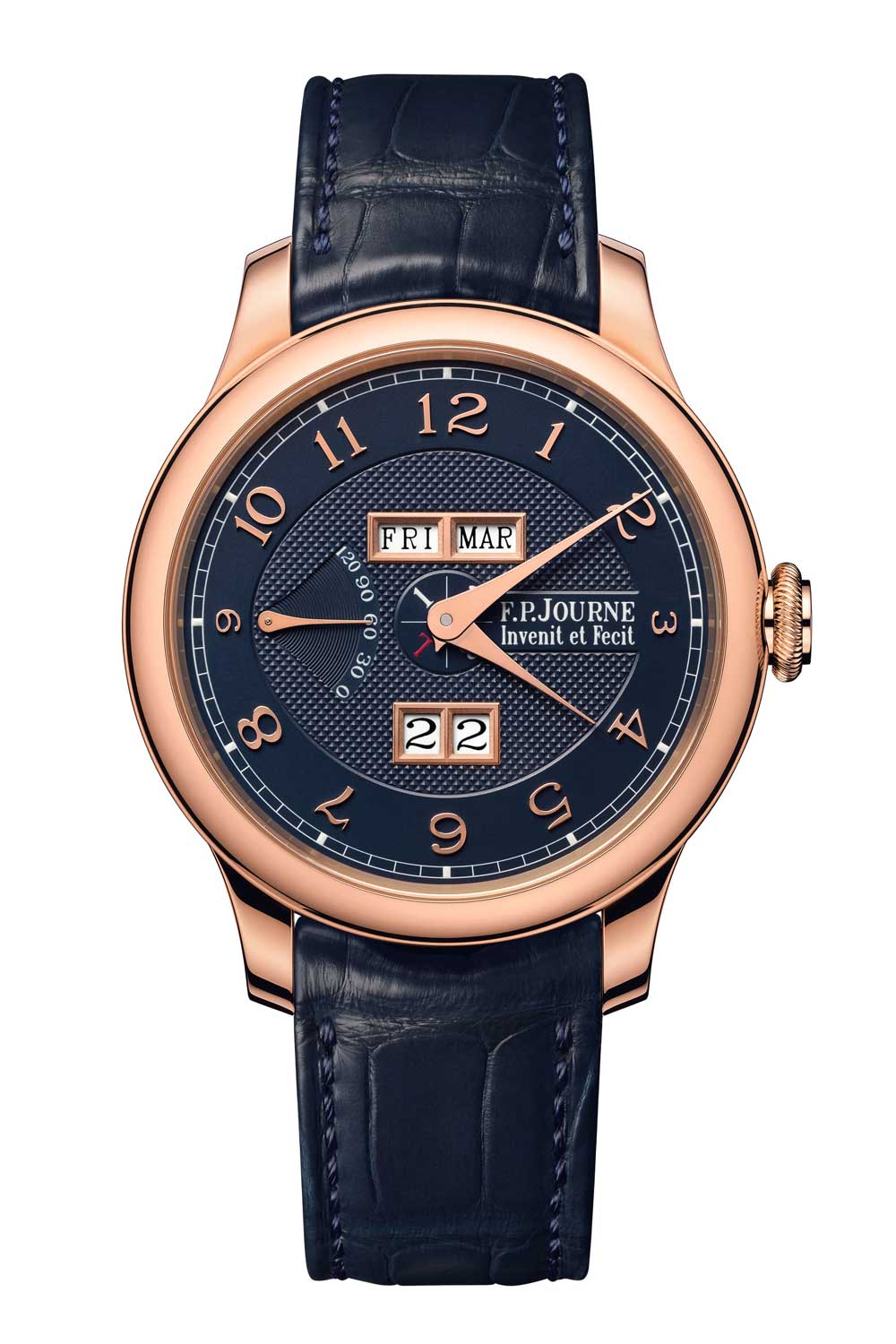 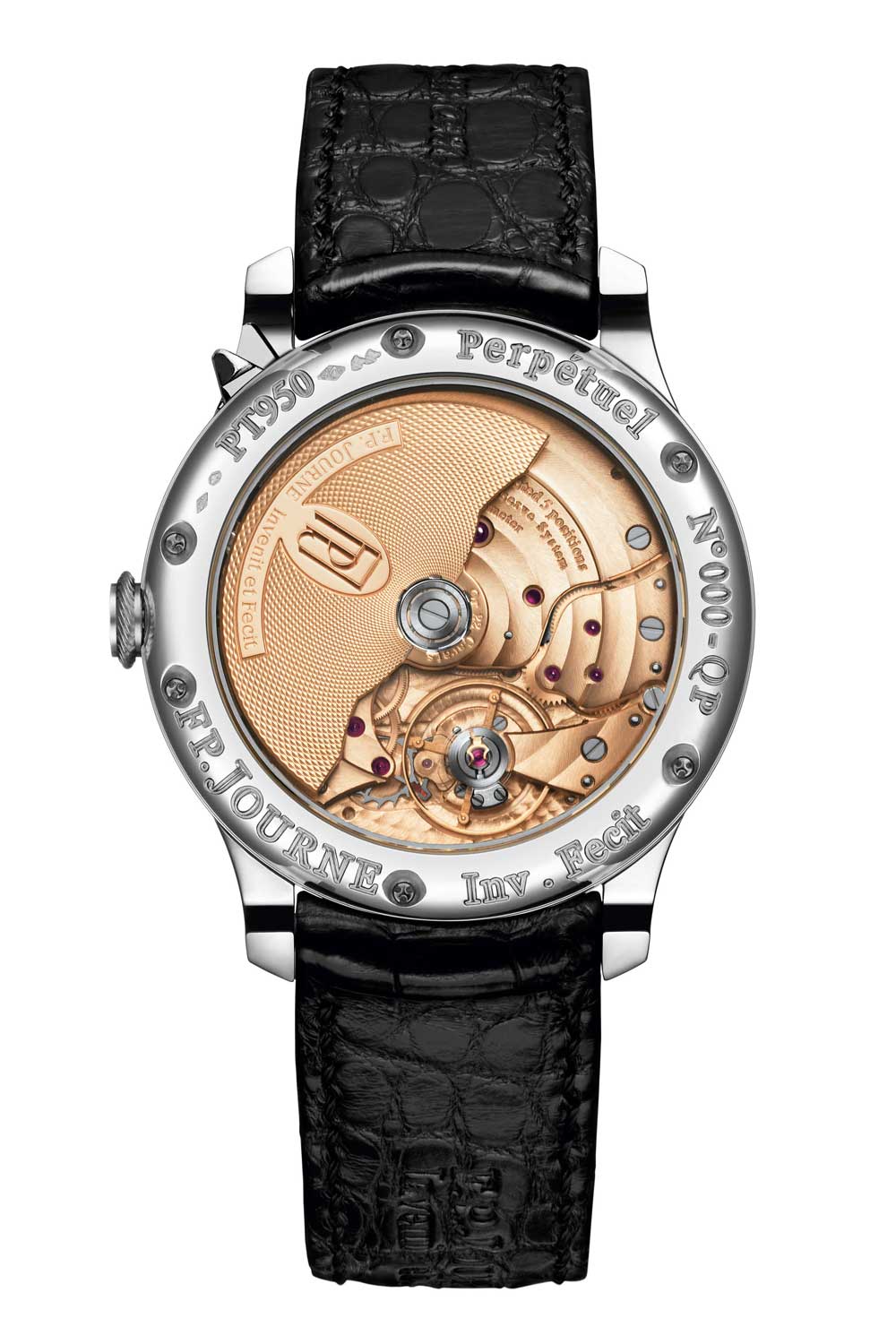