Having spent the better part of the first half of 2019 celebrating the 50th anniversary of one of mankind’s greatest achievements — the Apollo 11 lunar landing — Omega is now shifting its attention to yet another 50th anniversary. Namely that of the 1969 Bond film: On Her Majesty’s Secret Service.

On Her Majesty’s Secret Service was the sixth Bond film to hit the silver screens. It started a fresh-faced, George Lazenby who took over the baton from the only man to have played the role until then, Sean Connery.

History today recounts George Lazenby as the only actor to have played the part of Bond for a solitary installment. Though if you’ve ever spoken to likes of Jake Ehrlich, you would know that Lazenby was offered the role for seven more Bond films, while On Her Majesty’s Secret Service was being filmed. Lazenby, though, declined to the play the role any further.

For his one and only appearance as Bond, the watches that Lazenby donned were a 5513 Submariner and a 6238 Pre-Daytona. Of course, the watch that he is most noted for these days is the 6238 Pre-Daytona. One, because he’s wearing said watch in a rather raunchy scene in the movie with Catherine Schell as Nancy. Two, because the watch came up for auction recently, in 2016 with artcurial.com.

As of Golden Eye, the 17th installment featuring Pierce Brosnan’s first appearance as the MI6 officer, James Bond’s timepiece of choice has become the Omega Seamaster.

Since then Omega’s not only made watches specifically for Bond to wear on screen, but they’ve also created several 007 themed limited editions that they’ve launched in marking upcoming installments or milestones in the life of Bond.

With the impending release of 2020, No Time to Die — Bond film number 25 — and that it’s the 50th year since the film On Her Majesty’s Secret Service, Omega is taking the opportunity to launch yet another one of these 007 themed limited editions.

This time round, the watch is a 42mm Seamaster Diver 300M in stainless steel featuring a black PVD on black ceramic dial with a spiral-brushed gun barrel design and the 9mm bullet head at the center, obviously making reference to that famous Bond starting sequence (cue accompanying theme music composed by David Arnold).

The hands and indexes on the watch are in 18K yellow gold with the 12 o’clock index particularly shaped in the form of the Bond family coat-of-arms. Further details include the number 7 on the date wheel in the 007 font and a hidden ‘50’ inside the 10 o’clock index, which only shows when the Super-LumiNova lights up in the dark.

While we don’t have a picture of the caseback to show you (the one here is simply a screenshot from the video) the few from the Revolution team who were privy to the watch in the flesh, have informed that the watch’s back has the words, Orbis Non Sufficit engraved on it, which is the Bond family motto.

The watch will be produced as a numbered edition, limited to 7,007 pieces, with the number engraved on a 18K yellow gold plate on the side of the case near 8 and 9 o’clock. 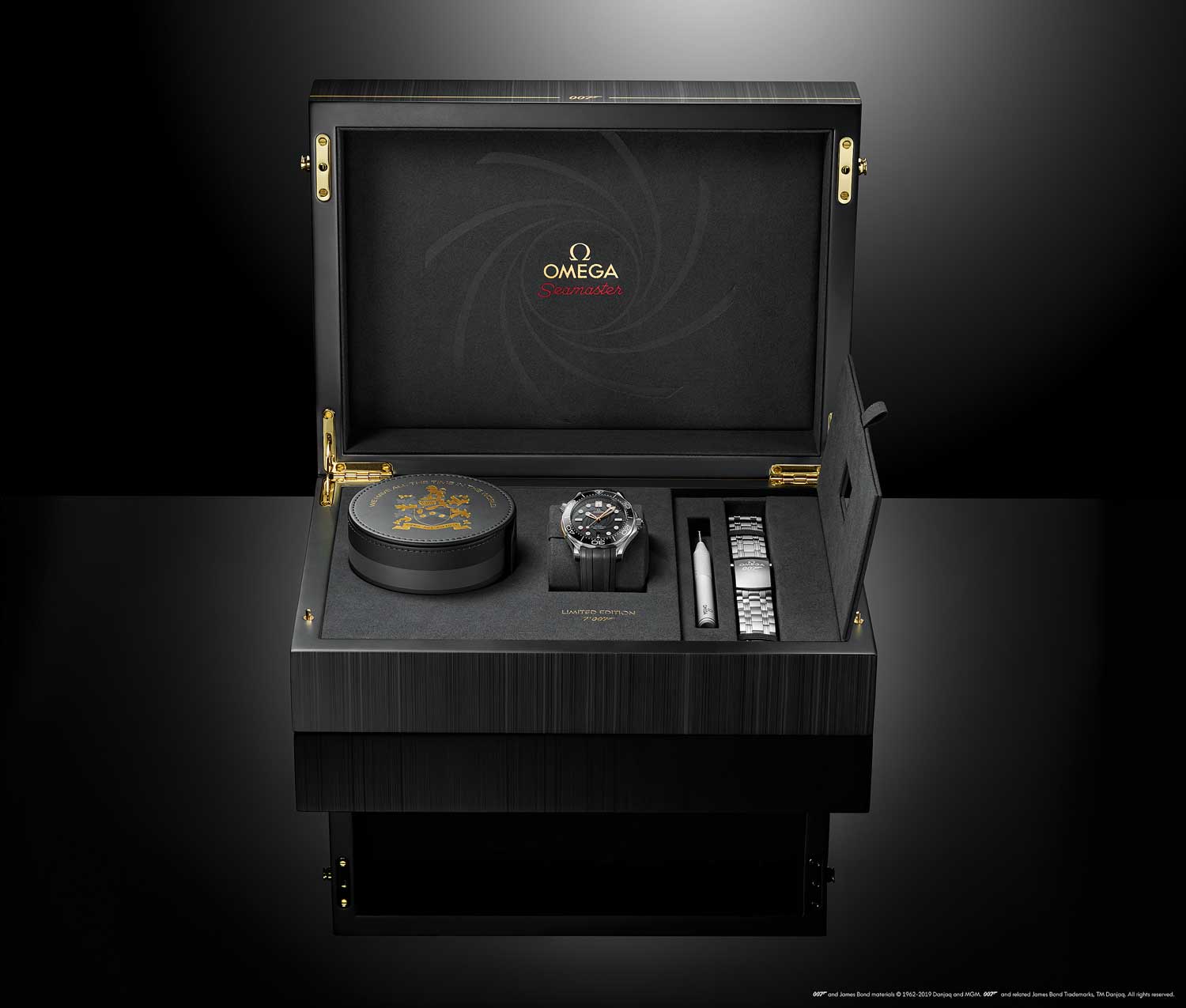 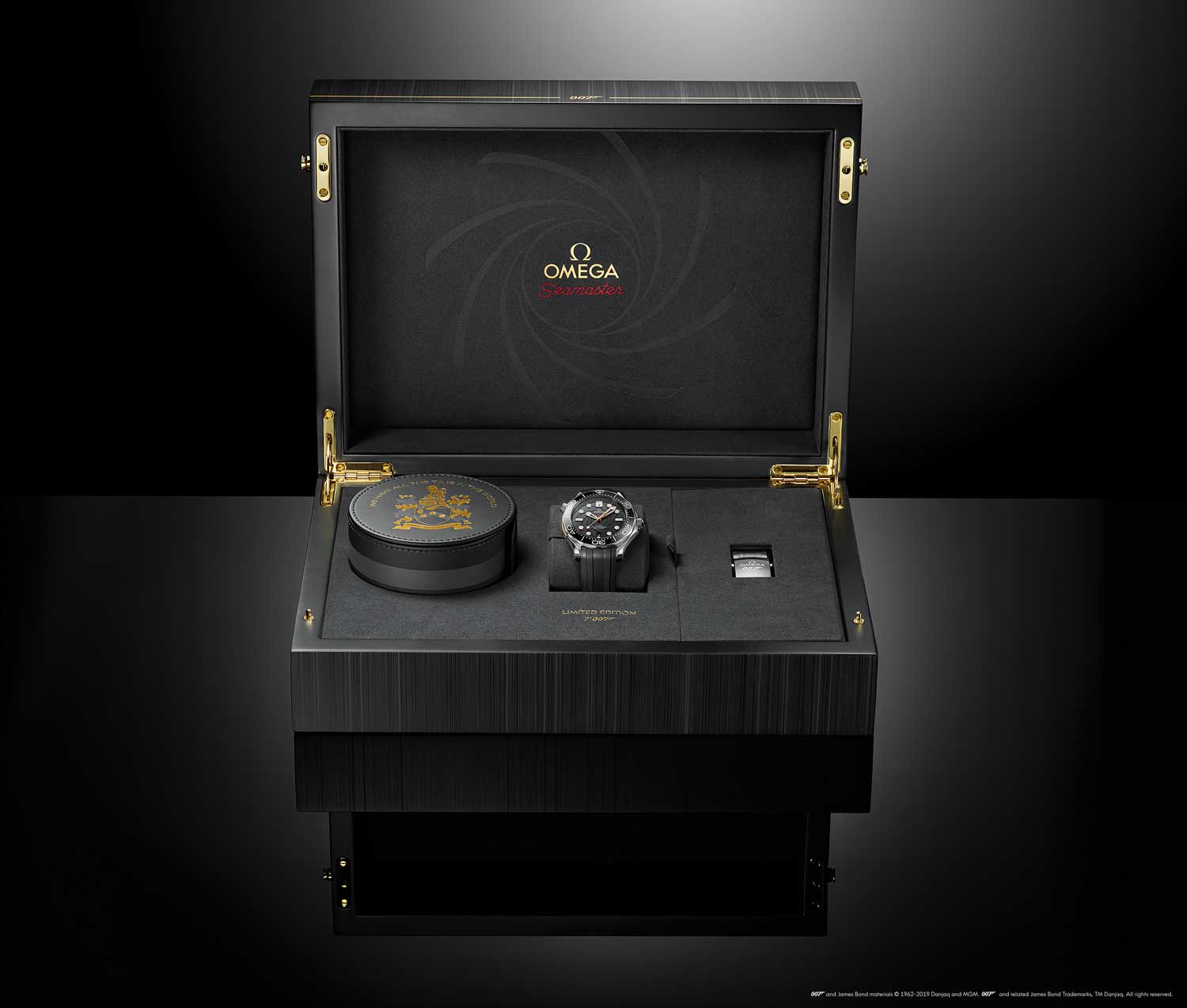