“14th year of MB&F, 17th calibre — when I think about it, it’s crazy,” says Max Büsser, founder of MB&F, “feels like it was yesterday. But we’ve come up with 17 different calibers already.

“This one [number 17] goes back four years, because that’s more or less what we need to create a movement. But actually [the real start of the story] goes back 28 years.” Max is directing us toward his time as product manager at Jaeger-LeCoultre, where he met a young and talented watchmaker at the maison’s prototyping department called, Eric Coudray.

“We always said: one day; one day we must work on something together. It took 24 years. [And then] Four years ago, I told Eric, you want to work on something [with me]? He said: Sure. You know, Kari Voutilainen? He replied: I know of him.

“[I asked] Would you like to do something with Kari? [Eric responded] Sure. And so I brought these two incredible watchmakers to the same table and we started working.”

Eric Coudray’s credentials today are simply this: he is the man who created the gyrotourbillon. He is the watchmaker from whom the concept of multi-axis tourbillon and escapements came to be.

To make sense of what Eric Coudray had dreamt up, Kari came in to design the underlying movement, such that it not only achieved Eric’s intentions, but is also culminated into a thing of beauty. Kari even took on the finishing of the movement. Adds Max, “Actually Kari even went to finish [many of the] parts himself on that movement.”

Looking at the movement of the watch, Kari’s touch is obvious. “This is [all] reminiscent of a 19th century pocket watch; the shapes are beautiful, the finishing is incredible,” says Max. “The barrels, where you see the ratchets, they’ve got this definitive Kari Voutilainen finish to them, the spiralling — basically Kari does that himself in his workshops.”

So what does this movement that two of the greatest living watchmakers have created, achieve? Max goes on, “The Thunderdome is Eric’s wildest — and I believe the most insane escapement — in history today. It’s the largest, fastest tri-axis [tourbillon].

“Eric had to come up with at least three or four world premieres. The first, I asked him I wanted to see a balance wheel [on top of the dial]. Because many of these multi cage pieces, you actually don’t see the balance wheel.” Max’s track record clearly shows that he has a thing for keeping balance wheels visible, front and centre.

Max continues, “So he [Eric] invented the first flying cage, which is virtually [a] non-existent cage, all this in an amount of parts — which is incredible — weighs less than a gram. You will see — if you look closer — the very first spherical balance wheel in history. The balance wheel is always flat, they’ve been [flat] for hundreds of years. Here, it’s a sphere: turning. It’s coupled with a helicoidal hairspring and it’s got a Potter Escapement.”

What’s a potter escapement? Mr Albert Potter, in the late 19th century, created an escapement where instead of having the anchor and the wheel in front, the wheel goes around the anchor, with teeth inside. Why did Max have to go and choose such an escapement? Max explains, “because the good old Swiss Lever Escapement did not [and cannot] function in the speeds [Eric required]. The Potter escapement, which works well, has great precision at lower amplitudes — allowed him [Eric] to work on this incredible piece.”

The tri-axis escapement of the LM Thunderdome has one axis that turns in 20 seconds, one in 12 seconds and one in eight seconds. The time indication, as it was on the earlier LM Flying T, is conveyed onto the small dial using conical gears at an angle. The baseplate of the movement that forms the majority of the visible surface under the sapphire dome, is done at Kari’s workshop on his 150 year old vintage rose engine turning machines.

“423 components to give you just hours and minutes, [but] that’s not the point,” says Max, “the point is this incredible mechanical sculpture, where — for years I’ve been trying to do 3D mechanical sculptures, it was usually the watch itself — here it is the escapement, which is the sculpture.”

MB&F will produce 33 pieces of the LM Thunderdome in platinum for its premier, but wait there’s more.

“At the beginning of this project is Michael Tay himself,” says Max, “Michael actually told me in 2012: we should do something with Eric Coudray. We actually sat down with Eric and said that we should do a multi axis [timepiece] together and Eric responded, ‘yes, but I can’t [right now], I’m already working for another company.’

“So the seed had been planted by Michael and so [when] we spoke about the 40th anniversary of The Hour Glass and the possibility of a special edition [Michael’s seed bore fruit]. So 33 pieces in platinum and 10 pieces in tantalum, just for The Hour Glass, which will have two different variations of dials. The first variation is the dark blue guilloché of Kari’s. And the second variation you’ll discover beginning of next year.”

44mm x 22.2mm; launch edition limited to 33 pieces in platinum and 10 pieces in tantalum for The Hour Glass; water resistant to 30m 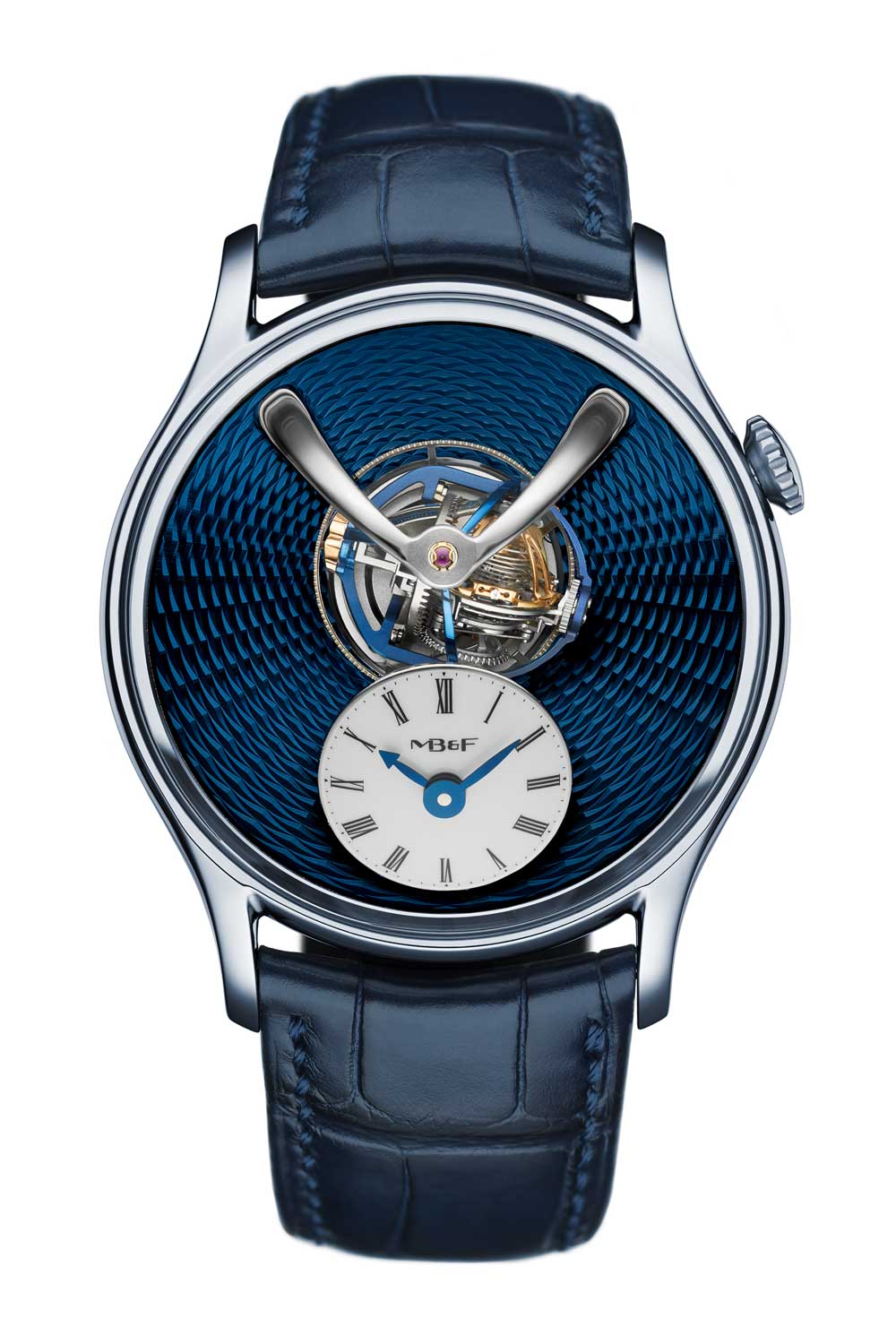 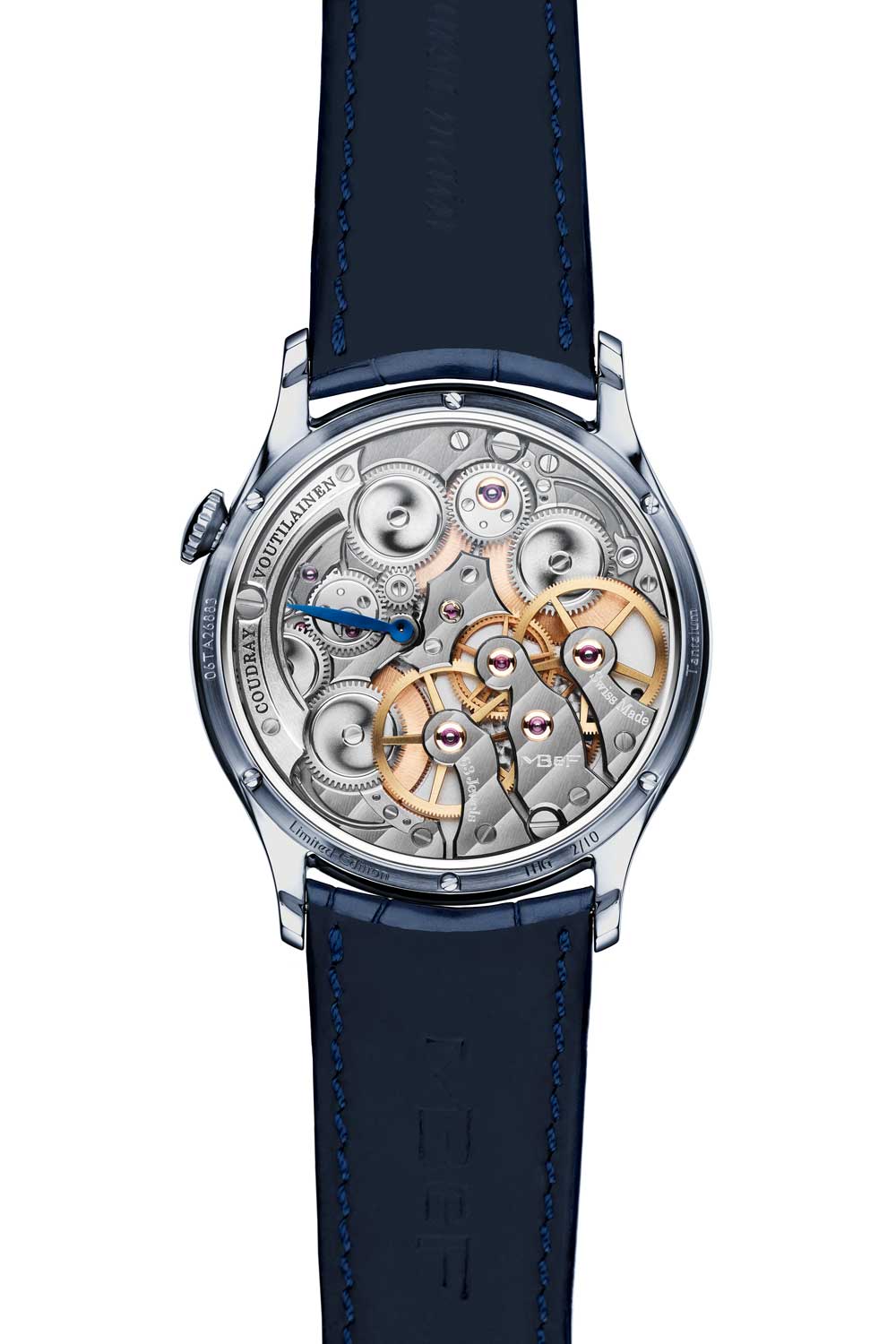