For 2020, Journe has updated the movement in the Résonance watch, adding two constant-force mechanisms to make the watch more precise than ever. The Calibre 1520, in rose gold, has only one single barrel spring which provides power for the signature double balance design. A differential is placed on the first wheel, which you can see in the centre of the dial, and it independently transmits energy from the barrel spring to the two secondary gear trains. Each secondary gear train is equipped with the constant force mechanism, or remontoir d’egalité, with a frequency of 1 second.

By using only one single barrel, Journe is able to eliminate any inconsistencies posed by the double-barrel winding mechanism in the original Chronomètre à Résonance movement, the Calibre 1499. It’s important to remember that resonance works only if the two escapements are kept very close in terms of oscillating rate so that the resonant frequency is the same. If they drift too far apart, then resonance does not happen.

In the original Résonance, Journe had to ensure that the two balances on the Calibre 1499 supported each other, with a difference of frequency no more than 5 seconds per day cumulated on six positions. In the new movement, having a single barrel, therefore, means that the same amount of energy is distributed across the two going trains, eliminating any variations that could sometimes be found in the original movement.

There are essentially two kinds of remontoir, one has an additional hairspring, and in the case of Journe’s watches, it comes with a spring bladed mechanism. The long blade-shaped spring provides a direct linear force to each of the two balance springs on the new Resonance so that they remain isochronous for 28 hours. The movement has a power reserve of 42 hours, but because the remontoir takes energy from the mainspring to recharge and there are two remontoirs to charge, the function lasts only 28 hours. But not to fret. Even after the remontoirs disengage, the balances will still be oscillating because of resonance, in a more constant amplitude than if there was only a single balance wheel.

The model is available in a case in platinum or in 18K 6N red Gold in 40 or 42mm diameter. There are two versions of the dial: one in 18K white gold and another in 6N red gold. The two sundials are in whitened silver guilloché clous de Paris. The watch comes with a choice of leather strap or gold or platinum bracelet.

The Influence of F.P. Journe’s Résonance

The Chronomètre à Résonance was the first wristwatch to utilise the physical natural resonance without any mechanical transmission phenomenon like a double pendulum or a double balance. Journe’s predecessors include 17 century Dutch scientist Christiaan Huygens, followed by the likes of Antide Janvier and Abraham-Louis Breguet in the 18th century, who all have timepieces based on the resonance principle.

Credit must be given where credit is due: it was Breguet who discovered that the dual movements in pocket watches not only synchronised with each other via mechanical resonance, they actually offset any variations from each other and enable more precise time-keeping. But the challenge of putting this into a wristwatch was accepted only by Journe about 185 years later, when he was able to put together a functioning resonance watch in 1999.

Resonance occurs naturally; when an object or a body moves, it transmits a vibration to its environment. When another object or body picks up on this vibration at the same frequency, it absorbs its energy. In radio communication systems for example, transmitters and receivers use resonators to filter the frequencies of radio signals. When choosing a radio programme, all we’ll hear is crackle until the wavelengths meet those of the transmitters and begin resonating together.

In watchmaking, the theory is that if two independent movements are set side by side to each other, they will eventually vibrate in synchronisation in something we call locked harmonic oscillation, where two adjacent oscillating systems with the same natural frequency become aligned in their mutual environment, resulting in higher vibrational stability and energy efficiency.

You can find out more about resonance in timekeeping in our article here.

The Chronomètre à Résonance is a limited production piece, set to be available at F.P. Journe boutiques starting mid-2020. 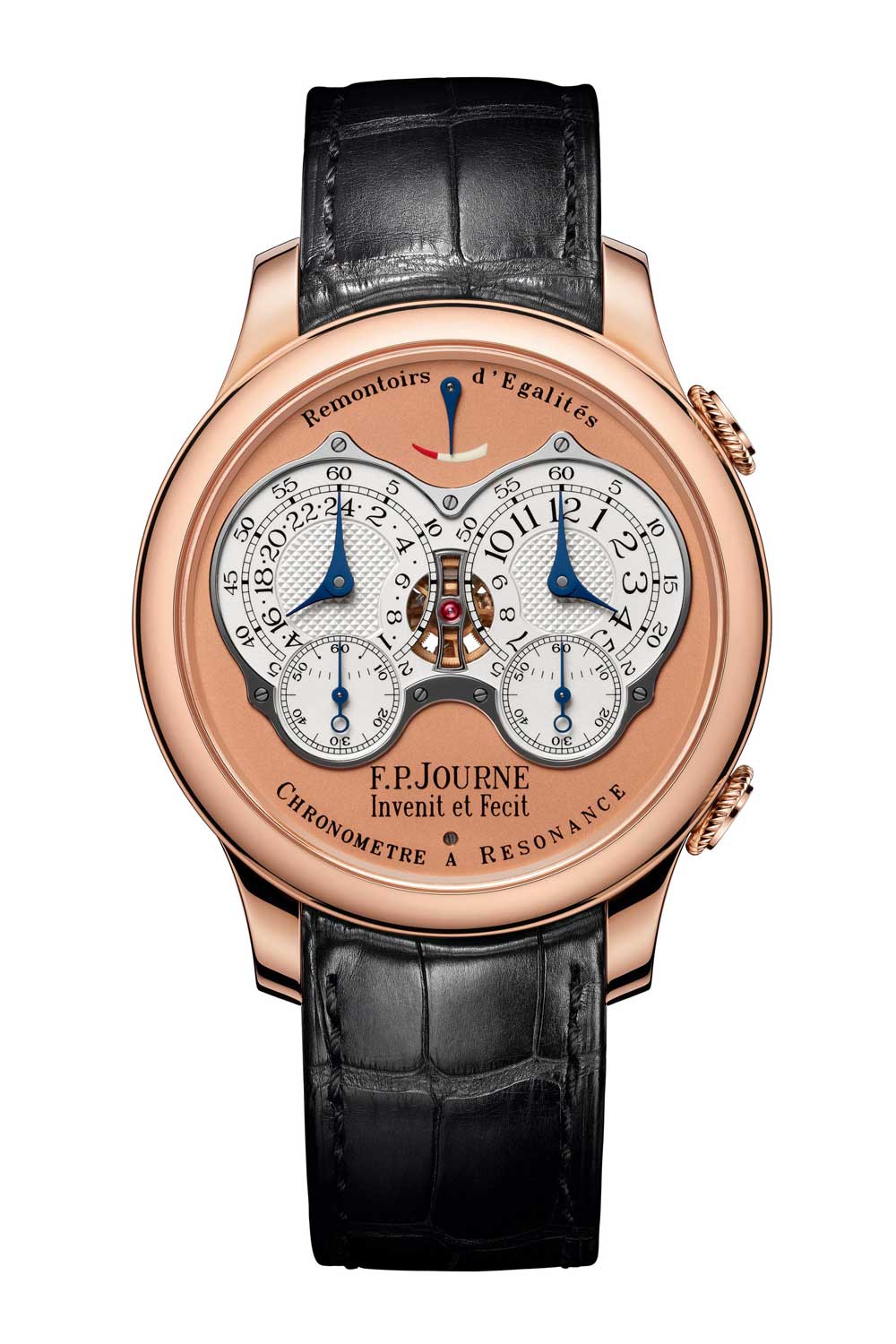 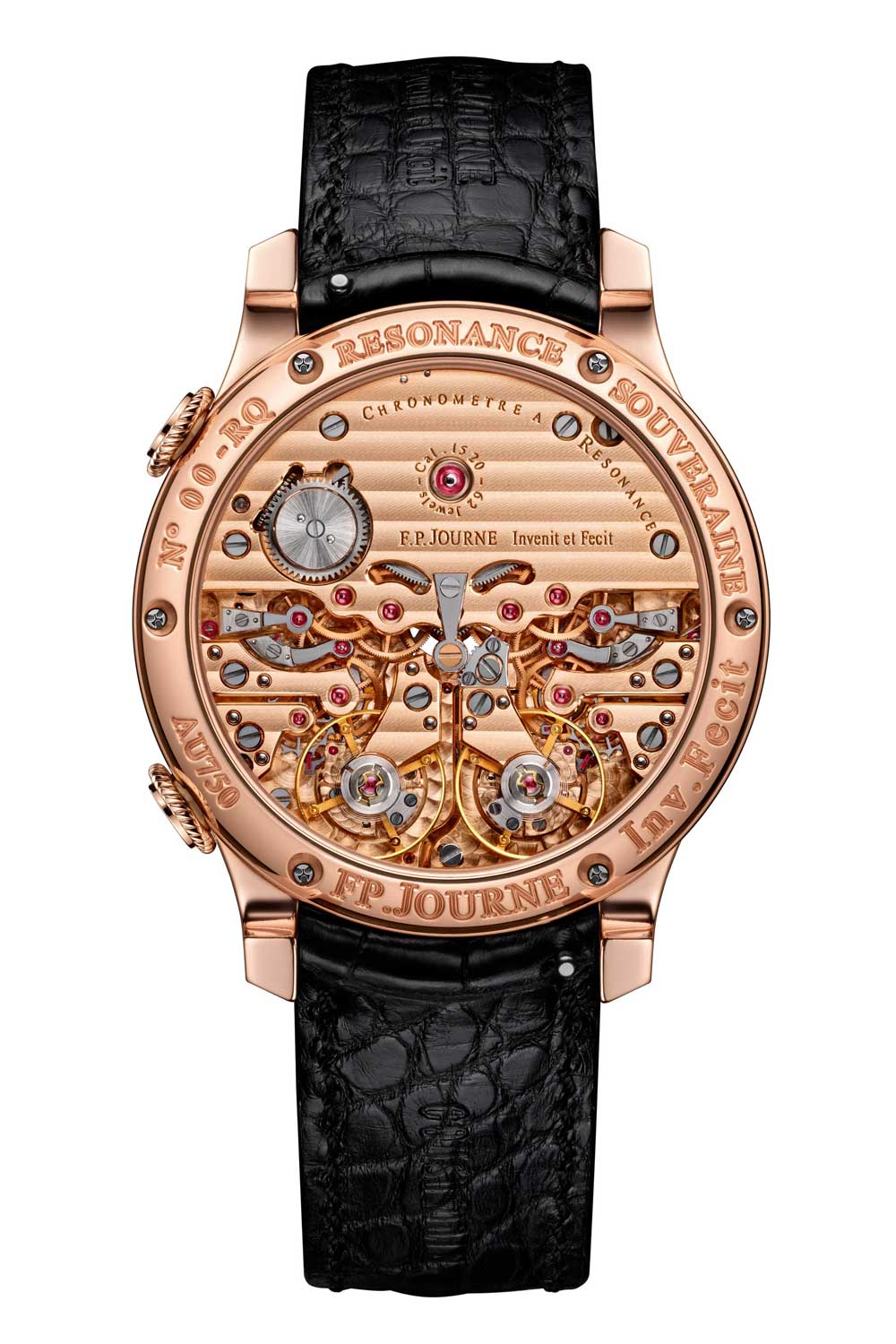