Why did you and David establish De Bethune?

We wanted to create an all-new type of watchmaking. At the time, most brands were blocked from technical advancement because they had to use the escapements that were available from Nivarox. No one was really making their own movements. We wanted to be able to achieve our wildest dreams by uniting the aesthetic and technical visions of the brand. If David tells me he wants to do something, I will always say: “Let me try to find the way.”

Tell us about the in-house balance wheel that De Bethune introduced in 2004.

With a balance wheel, you want the greatest inertia combined with the lightest weight. This is good for chronometry as well as power reserve. I created a design with four arms in titanium, and then I removed the rim of the balance and placed a weight at the end of each arm, which can be adjusted to get the best result. When I tested it, it achieved a 20 per cent higher quality factor than a traditional balance. Since then, there have been modifications to the form to improve manufacturing precision and quality. For example, I flame-blued the titanium arms to stabilise them.

We are constantly evolving the design of the balance wheel. Take, for example, the one in the World Traveller. It is a titanium wheel with gold weights poised on it that act like the holes in a golf ball in that they start to generate their own momentum when in motion. The result is a beautiful balance wheel with greater aerodynamic penetration and better quality factor. We did experiment with silicon but we concluded that we preferred a metal hairspring with a very particular terminal curve.

What is the idea behind your terminal curve?

Firstly, we wanted to achieve what the Phillips terminal curve does but on a flat spring avoiding the need for extra height. Secondly, I don’t like the idea of bending the hairspring – if this is not done perfectly, the performance is compromised.

Instead by working on the outside of the curve, I can have the final part of the spiral slightly thicker, which is the same as having a greater active length to the spiral. By working with the profile and thickness of the outer curve, you can have a hairspring that breathes concentrically and retains its centre of gravity perfectly.

Also, because a traditional stud retains the hairspring between two pins, there is always some deformation at this point as the hairspring shakes between these two pins. When the watch is vertical, this shake causes the watch to lose amplitude and slow down. Our design allows the hairspring to be fixed rigidly using a single screw on one side only, which eliminates this problem.

The spiral is made of a normal (nickel-iron) metal like that you would get from Nivarox, however the material for the end curve is something we don’t tell anyone. Were you the first brand to use mirror-polished titanium cases?

Yes. There were some brands that had previously made titanium cases. But they were all using Grade 2, which is an industrial grade. I had already tried polishing Grade 2, but there were visible holes and other irregularities on the surface. In contrast, Grade-5 titanium was created for medical purposes and can be polished to a finish because of its purity.

When did you start creating heat-blued titanium cases?

We were experimenting for 12 years, applying this technique to different parts, such as the lugs, until the entire watch became blue. We started to apply the blue thermic treatment to our polished titanium around 2012. We are now starting to do the cases ourselves, but it has been a steep learning curve.

The blue is an oxide that deposits on the titanium when you heat it to a certain temperature, which also makes it more stable. So the initial intent was performance and not aesthetic, but I always like it when something functional is also beautiful. The blue does patinate when you wear it and it can be scratched but we can always repolish the case or the lugs and redo the treatment.

What was the first watch you created using Grade-5 titanium?

It was the Maxichrono in 2006. It was the first watch in polished Grade-5 titanium and with our signature mobile lugs. It also had a chronograph movement that beat at 10Hz with a 30-second chronograph featuring three column wheels. It took a while for us to come to market with the watch because we had to ensure the reliability of every aspect.

The production model of the Maxichrono differs from the prototype in that it is 5Hz and is a traditional 60-second chronograph, as opposed to a 30-second chronograph which people found a bit confusing to read. The other thing we changed was the clutch system. The prototype had a vertical clutch, which has certain weaknesses, so the production model ended with what we call the “Absolute Clutch” or the “De Bethune Total Clutch System”. We patented this in 2015.

What is the De Bethune Total Clutch System?

The chronograph has three major parts: the hour counter, the minute counter and the seconds counter. Each one of these has a column wheel and each uses a different type of clutch. Because vertical clutch chronographs are constructed for the clutch to be running all the time, and for the performance of the chronograph to be chronometric, this means that when the chronograph is not activated the watch is not as precise.

In our system, the clutch and chronograph train are not normally running. Only when you engage the chronograph does it start to run. But the important thing here to understand is that the clutch is offset and runs at one revolution per two minutes. So you lose much less amplitude driving this than a normal one. Here precision is doubled because it goes two times slower. And if there is a small fault in amplitude, it is less important. The seconds wheel is decentralised and drives the chronograph wheel, which makes one revolution every minute. Even better, this system is easy to assemble and easy to repair and service. We always think about sustainability. 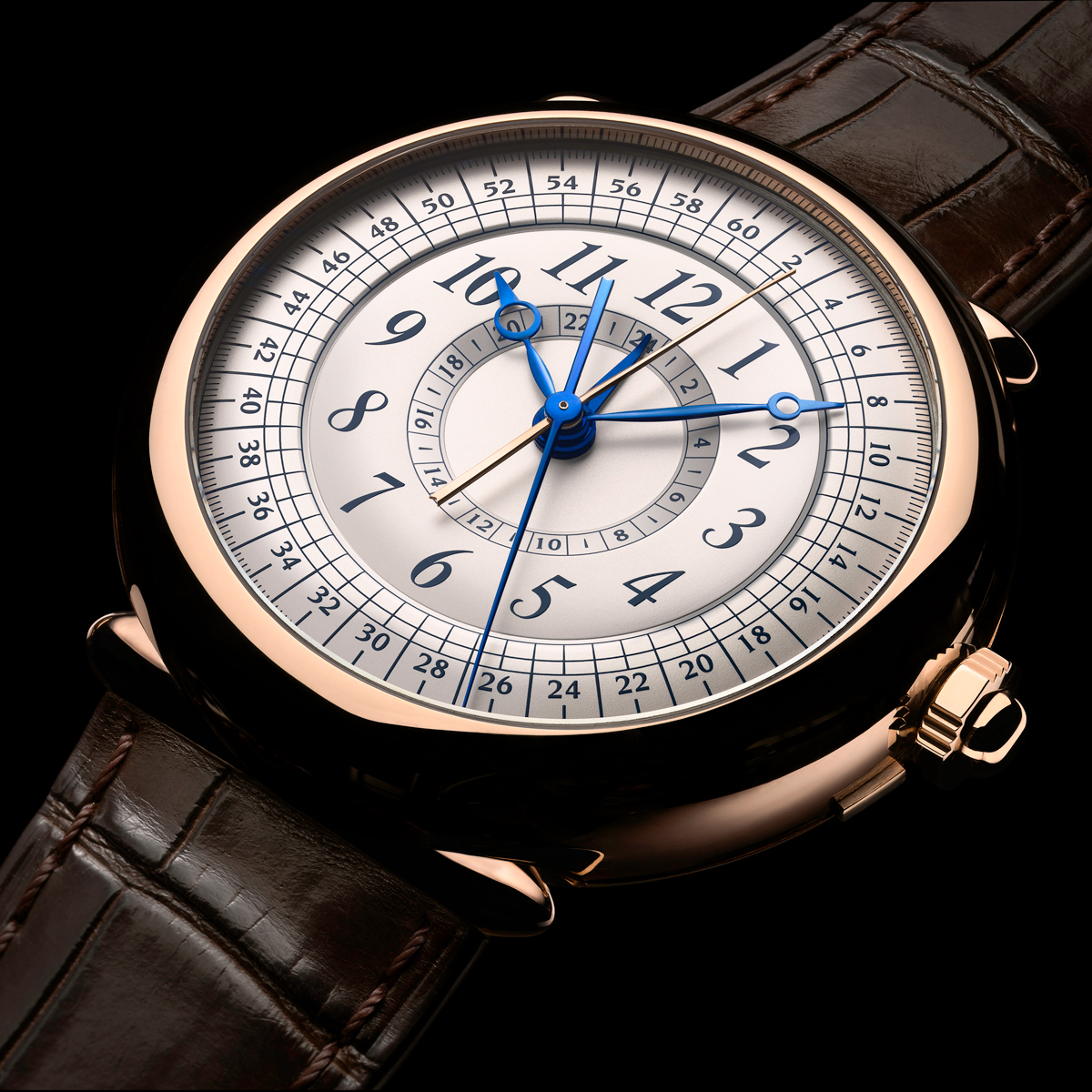 What watch do you consider most emblematic of De Bethune?

We have the classic DB25 line and the contemporary DB28 line. In terms of design and technology, the DB28 is the most emblematic as it represents many of our signature innovations – the balance wheel facing the front of the watch with the balance in silicon and a ring of platinum, the in-house hairspring with patented terminal curve, and the triple parachute anti-shock system. The watch also features our 3D moonphase indicator crafted from a ball of palladium and flame-blued steel. Finally, the case features our mobile lugs offered in two sizes and in a variety of materials.

Tell us about the 3D moonphase indicator.

Little by little the moonphase started to appear in more of our watches. Eventually we decided to place it in the DB28. Although this watch wasn’t a perpetual calendar, the moon had become something of an object of beauty in itself. As everything in De Bethune has to be functional even if its primary purpose is to create emotion, this moonphase indicator is accurate to 122 years.

And what’s special about your tourbillon?

We did not want to make just another tourbillon. I realised that for a tourbillon to be least affected by the micro shocks that are characteristic of the life of a wristwatch, it had to have an elevated vibrational speed. So I thought of 5Hz. And all the parts inside the tourbillon had to move at the highest speed possible to give then greater autonomy from changes in position, so I thought of a 30-second tourbillon. This meant that all the parts had to be as light as possible but I didn’t want to reduce the diameter of the balance wheel because this would be less optimal.

I concluded that the tourbillon could function well as long as it weighed less than 0.2g – a challenge as there were 63 components involved. For us to achieve this goal, we had to remove the three arms of the cage and construct it from titanium. We had to structure the cage in a way that was minimalistic and monobloc, but had steps in it to make it more rigid. Also, the cage and everything in it had to be totally balanced. It is the sum of all of this that was the challenge. My Kind Of Blue Tourbillon is both accurate and visually stunning. Is it a priority at De Bethune to create time- telling objects of art?

Everything we do is to increase performance, improve function and hopefully create something beautiful. From the beginning we wanted to make something that was missing in watchmaking, to help to continue the beautiful story of watchmaking. Nothing we do is without a performance purpose but it is always expressed in a way that is poetic and beautiful to behold. To me, this is what makes our watches simultaneously timepieces, but also objects of art. And so when we launch a minute repeater one day it has to bring something in terms of performance, sound and beauty. It has to be real watchmaking.