Introducing the Zenith Chronomaster Revival A385

The Boeing 707 took its first commercial flight in 1958. For Boeing, this was their first successful commercial passenger craft, which remained in production until 1991 with a total of 1,010 aircrafts produced. But beyond all of the facts and figures, what is ultimately attributed to the 707, is that it is the craft that ushered in the jet age of commercial travel. What’s that got to do with Zenith, the watchmaker?

Well, a decade on from the 707’s first commercial flight in 1958, Zenith — the watchmaker — announced the world’s first serially produced automatic chronograph movement, the El Primero. It’s one thing to be able to produce a movement in large numbers and have it hold itself together, but for it to maintain chronometric integrity when faced with the perils of everyday life — now that’s a whole other matter.

To prove its case that Zenith had, not only managed a mechanical feat, but truly one that is a feat of watchmaking evolution with lasting impact, the brand sought to put its new creation through the rigors of life, as it would’ve been in the late 1960s.

The first watches that were used to bring the 1969 El Primero to market were the A384, the tonneau-cased Zenith legend; the A386, the classic round faced Zenith chronograph, which has the indisputable claim as the face of Zenith today; lastly, the lesser known, A385. While all of these references hold a special place in the horological history books for being the first watches to give life to the 1969 El Primero and, therefore, the first commercially available automatic chronographs, there’s a further claim that the A385 makes that is quite unique.

According to Zenith’s research, the A385 with its brown gradient dial, “was the first ‘smoked’ dial ever to be made in the watch industry and for Zenith.” Therefore, documenting that Zenith was not only technically forward thinking, but creatively as well.

Okay, still, what does all of that have to do with a Boeing 707?

Remember those life rigors that Zenith had to subject the El Primero to, to prove its mettle? You see, in light of the growing volume of air flights that the world was taking in this timeframe — thanks in part to the 707 — Zenith again, thought ahead, to prove that its watchmaking could maintain chronometric integrity during air flight. So, during an Air France Boeing 707 flight from Paris to New York, in 1970, Zenith decided on an unthinkable test.

Rather than have the watch in the safe confines of the passenger cabin, they decided to strap their El Primero equipped test subject to the landing gear of the aforementioned 707. Meaning to say that the watch was subject every element that the cruising altitude (25,000 to 40,000 ft) of a 707 would’ve presented. Which according to Zenith, would’ve amounted to, “drastic temperature fluctuations, wind force and changing air pressure.” Needless to say at this point, that the watch that was put up to — and survived — this pressure test, was the A385.

For their first watch unveiling of 2021, Zenith has decided to revive the A385, as the Chronomaster Revival A385, with the same tonneau case and the smoked brown gradient dial. The watch is powered by the El Primero 400 Automatic, the present generation in the long lineage of the El Primero, boasting 36,000VpH, or 5Hz, and 50-hour power reserve.

Keeping to the tone of revival, Zenith will be offering the watch with an option for a light brown calf leather strap with protective rubber lining and alternatively, a “ladder” bracelet with stainless steel double folding clasp, inspired by the Gay Frères bracelets that were once a staple with early El Primero watches.

The Chronomaster Revival A385 is available at Zenith Boutiques and online shop, as well as at authorized retailers around the world. 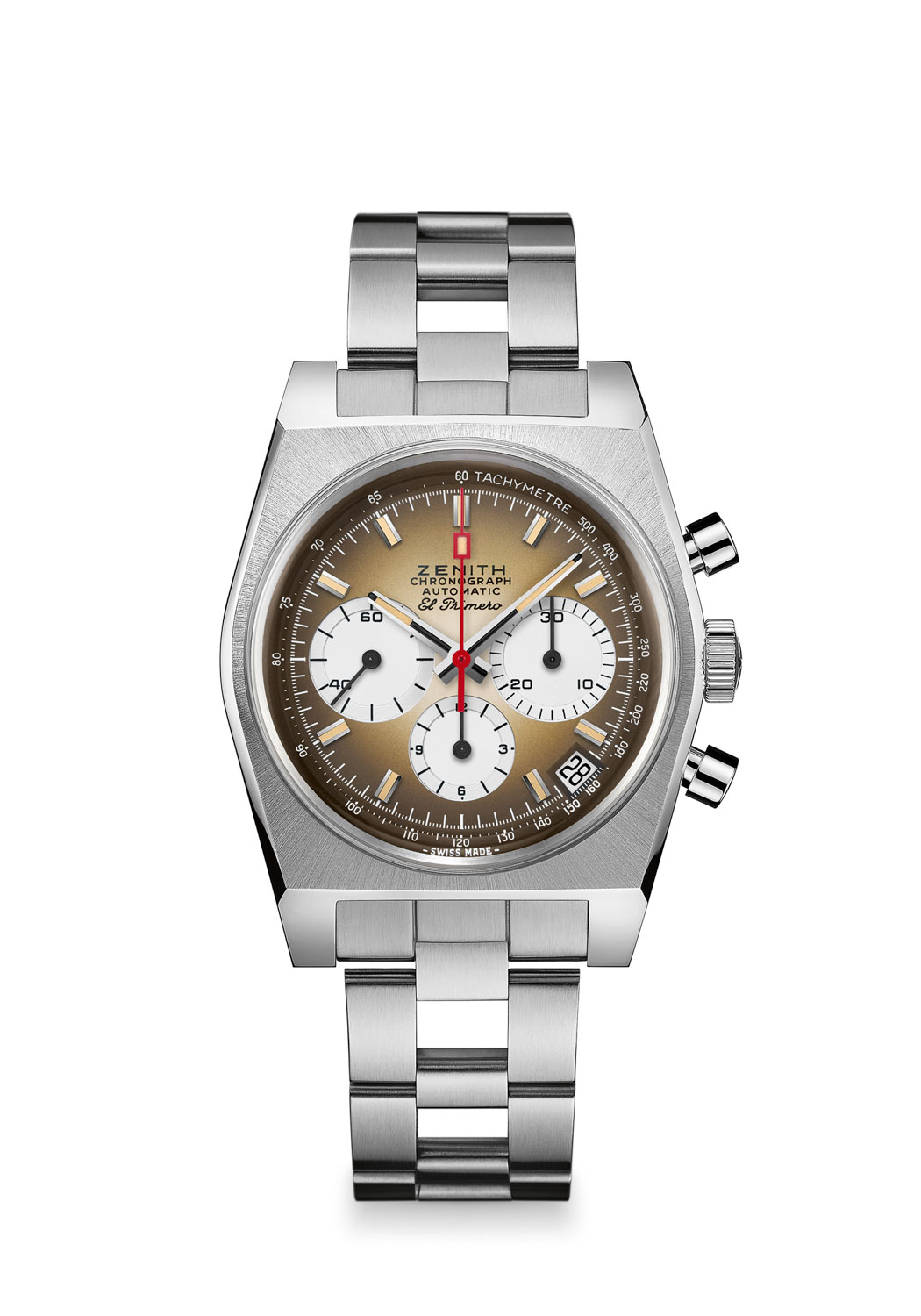 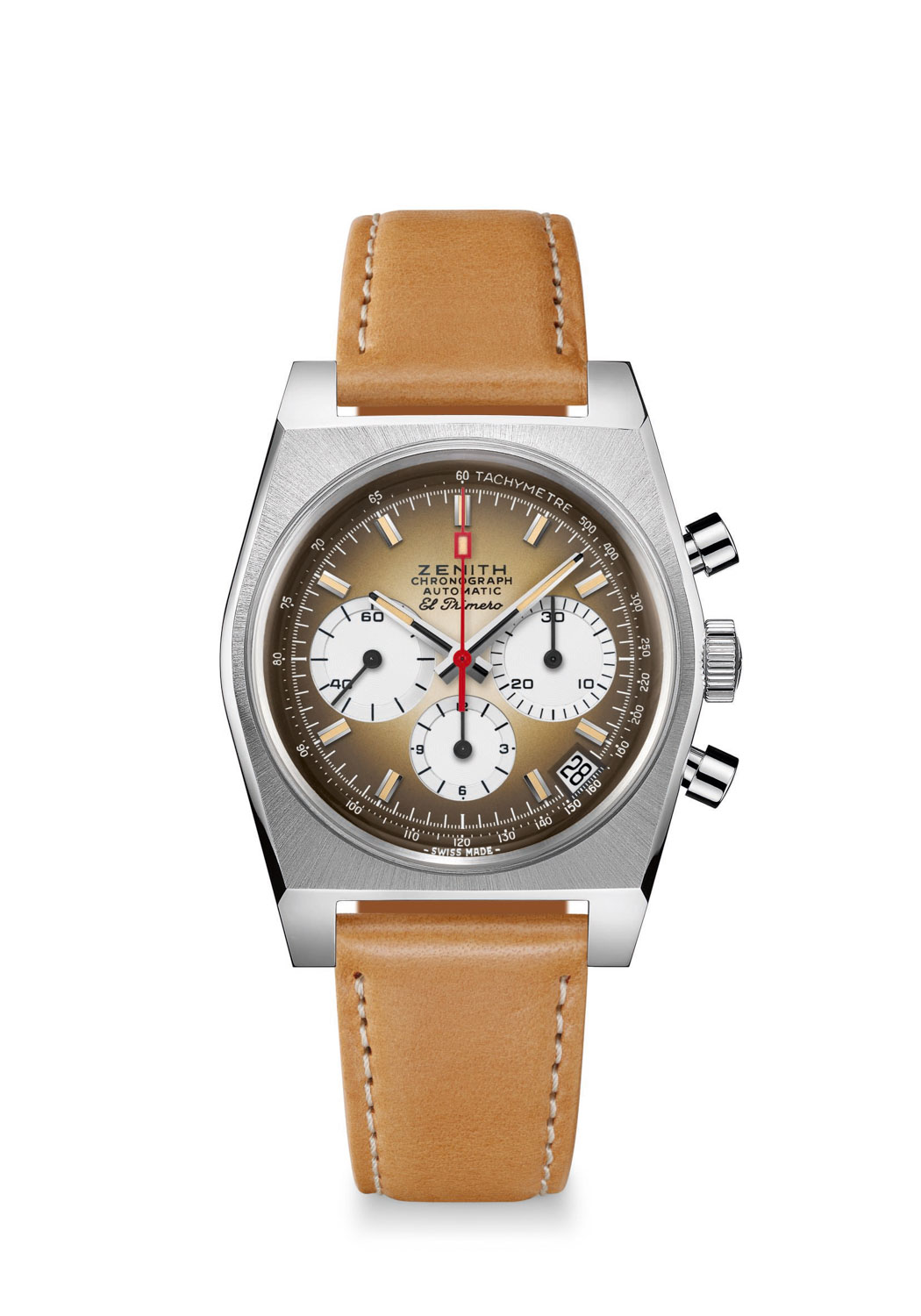