90 Years of the Oyster: The Indomitable Crown

The History of the Oyster

A shining example of Rolex’s innovation in the world of watchmaking is the introduction of the first waterproof and dustproof case, the Oyster, in 1926. Just one year later, Rolex proved its case to be waterproof on the wrist of English swimmer Mercedes Gleitze, who wore it while swimming across the English Channel—the swim took over 10 hours and the watch worked perfectly throughout.

The specially-designed Oyster case was fitted with an innovative system featuring a screw-down bezel, screw-down case back and screw-down winding crown. In those days, the bezel was fluted, allowing it to be screwed onto the middle case with a special Rolex-invented tool, and this fluting distinguished Rolex watches in the marketplace. Today, Oyster bezels are no longer screwed onto the case, but several models still have the distinctive fluting.

The promotion with swimmer Mercedes Gleitze mentioned above launched the Testimonee concept, and Rolex has been working with exceptional individuals ever since to link their excellence with that of the Rolex watches they wear.

Rolex and the rest of us are celebrating the 90th anniversary of the Oyster case this year—an innovation that continues to have impact today. 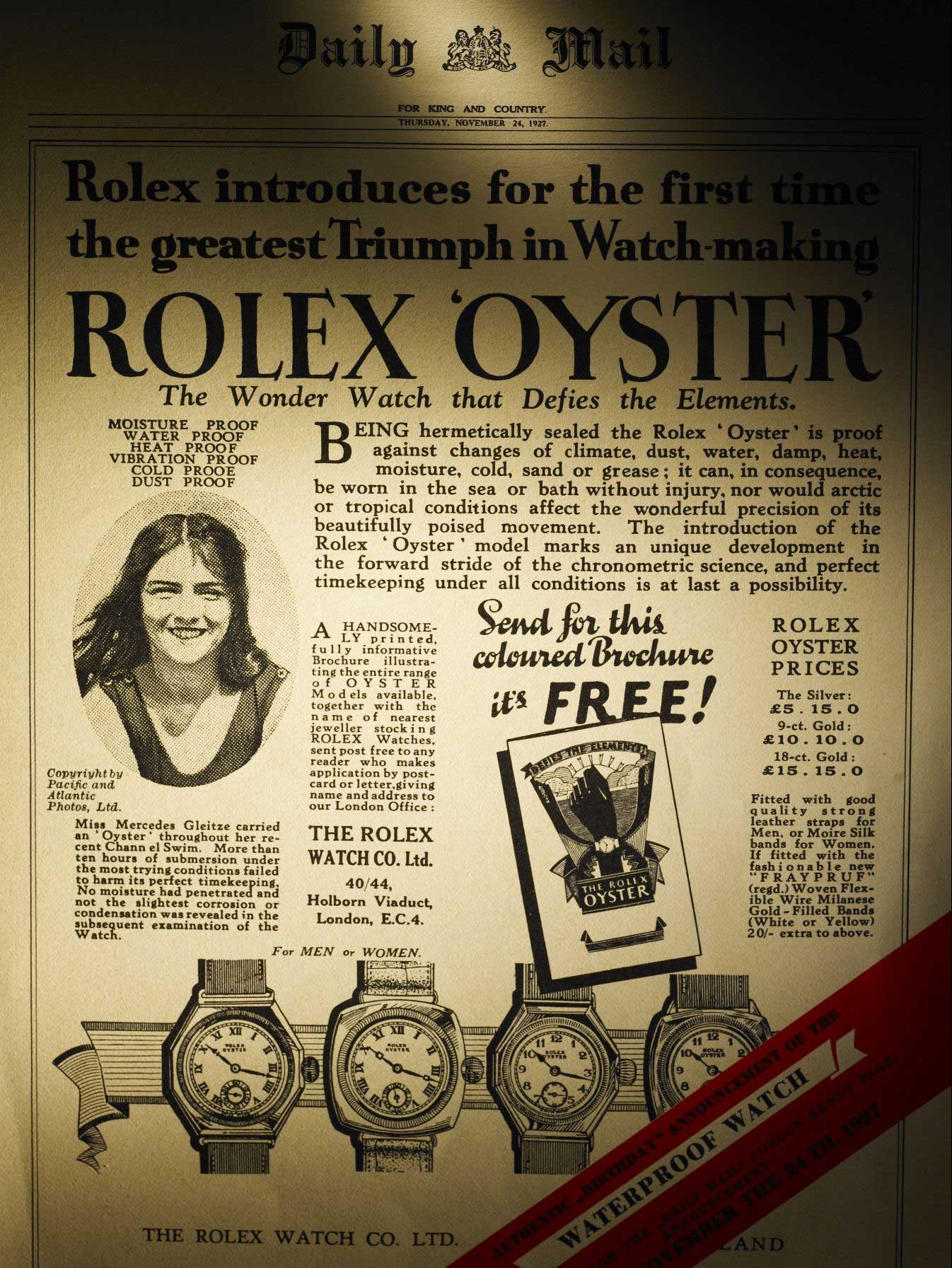 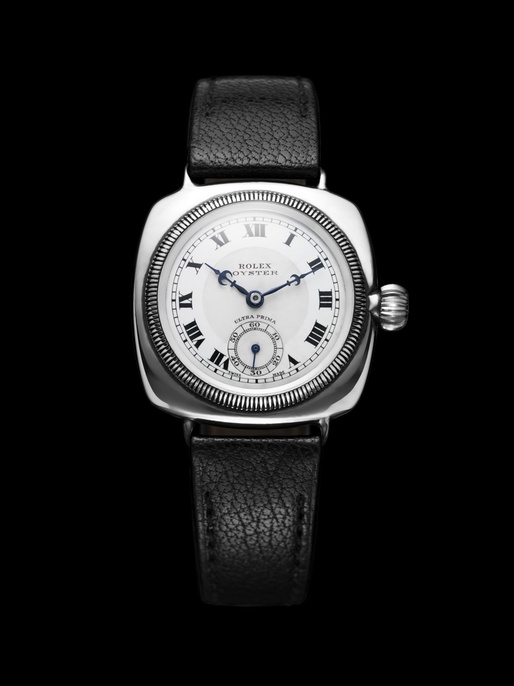 Rolex has been continually working to refine its movements, and over the last three years, the brand has introduced two new movements that have pushed the envelope of utility, performance and power reserve.

In 2014, Rolex unveiled the new caliber 2236, featuring the in-house Syloxi silicon hairspring, specifically designed for a new generation of women’s timepieces, due to its smaller size. The new hairspring is paramagnetic, impervious to temperature variations and highly shock-resistant.

In 2015, the caliber 3255 was introduced. Designed to redefine the Superlative Chronometer label Rolex introduced in the late 1950s, this model heralded the new Superlative Chronometer test that Rolex introduced on top of the COSC certification. This movement set new standards for precision (two times more precise than COSC), power reserve (70 hours), reliability, resistance to shocks and magnetism, as well as ease and convenience in adjustment. A total of 14 patents cover all the breakthroughs included in this revolutionary movement.

The 3235 movement was introduced this year, and it incorporates all of the developments from the 3255—like the Chronergy escapement—while also including the faster and more efficient self-winding system, easier to sense positions on the winding stem, unrestricted calendar correction and precise time setting. This movement also undergoes the new Superlative Chronometer Certification, introduced with the 3255. 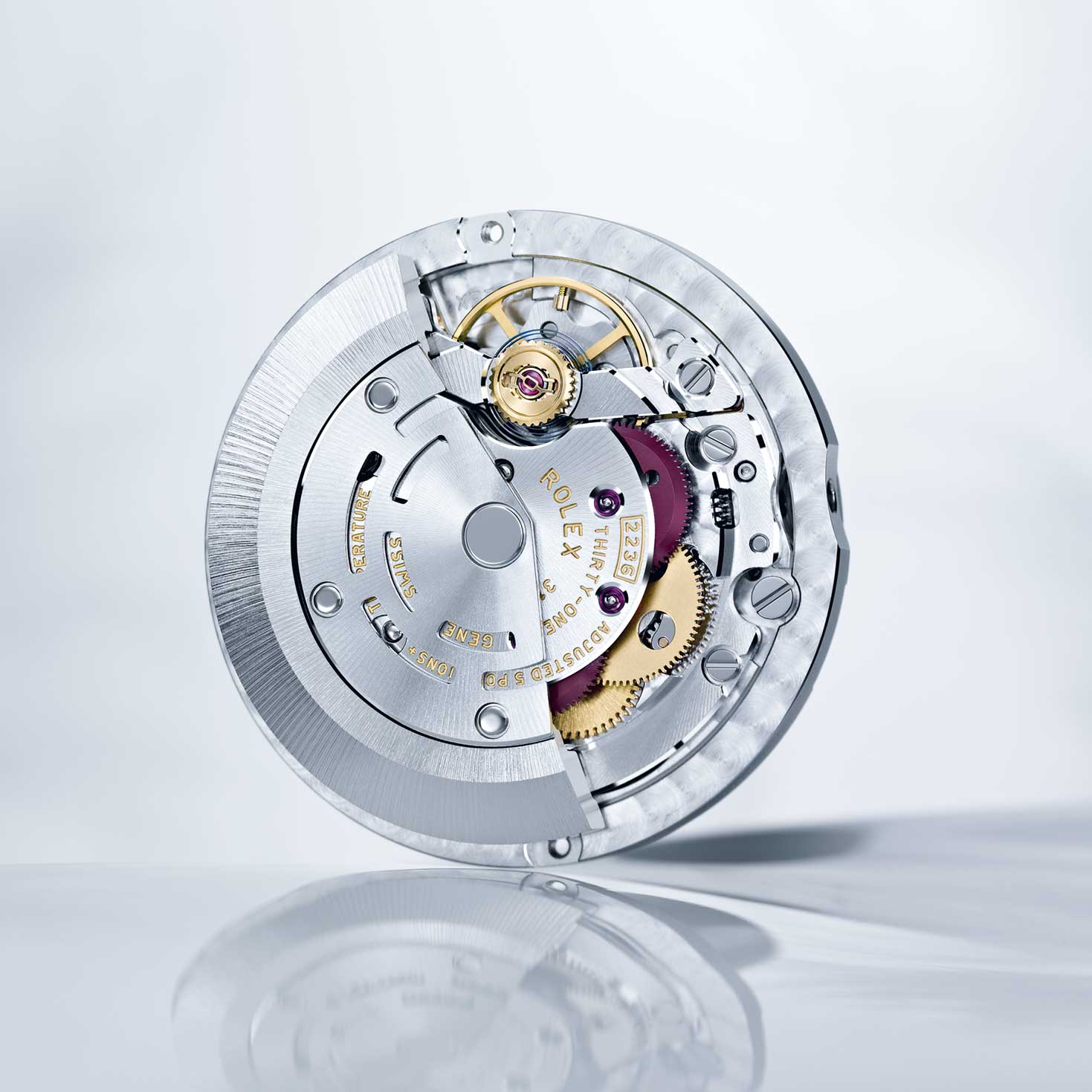 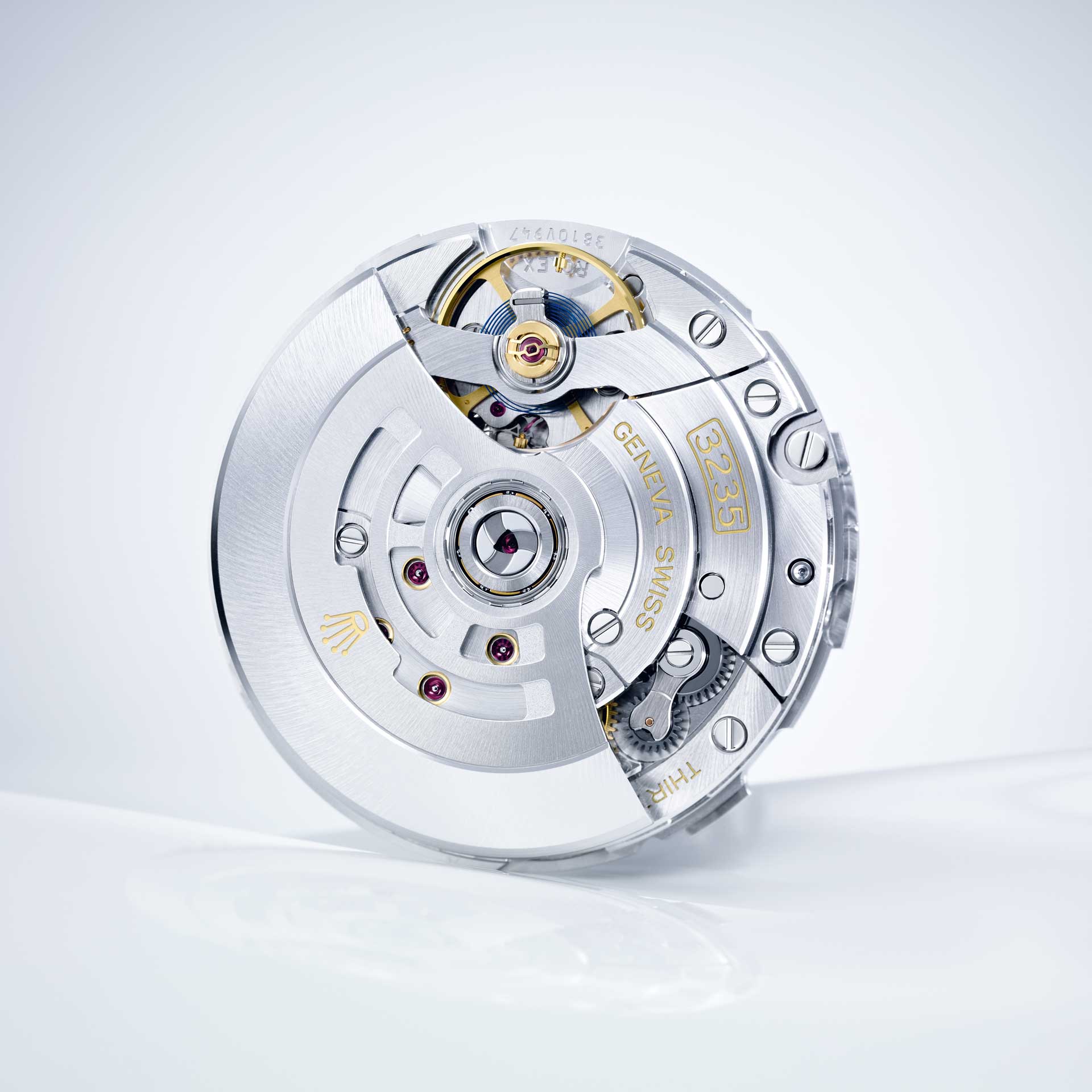 Rolex has always been keen to put its watches to the test in the most extreme circumstances. What started in 1927 with that swimmer in the English Channel has continued with explorers, racecar drivers, divers and oceanographers, pilots, scientists and more.

Rolex watches have been in more places around the globe than any others, from the summit of Mount Everest to the depths of the Mariana Trench. Rolex prides itself on developing watches that are meant to be used, whether it’s in the cold of the Arctic Circle or the heat and humidity of the Amazon Rain Forest, or just on the neighborhood golf course.

In fact, many professionals on overseas missions insist of wearing a Rolex, knowing that it has value all over the world. I once interviewed Olivier Gruner, a former French Commando Marine, the European version of the Navy SEALs, and he told me this about Rolex: “In Special Ops, it’s important to have something to barter with if you are in trouble. What I like about Rolex is that it can be used as currency anywhere in the world, because everyone knows Rolex. I still wear one today and it may one day save my life.” Since that swimmer put her toe into the English Channel so many years ago, Rolex has dominated the sports world, working with the best of the best, from Roger Federer to Jordan Spieth and Lindsey Vonn, as well as with the key motoring, golf, sailing and equestrian events. The events in which Rolex is a sponsor are a hit list of the most important in each universe: The Championships, Wimbledon in tennis, The Masters Tournament in golf, Formula 1 motor racing and the Rolex 24 At Daytona® endurance race, and many more. “Rolex’s involvement has been very important and the Rolex Daytona watch has an illustrious history in the motor sport world,” says legendary driver and Rolex Testimonee Tom Kristensen. “It is the ultimate watch for the ultimate motor sport drivers and events. This is the case at Le Mans, which is my favorite and the most magical race, but also in Formula One, the World Endurance Championship and the Rolex 24 at Daytona. Then there are the heritage events, such as Goodwood Revival and Monterey Classic Car Week, where Rolex shows an extra spirit. These different events enable the brand to have a special presence worldwide. Rolex inspires the young fan very early on—they watch and dream of racing. They already have an eye on which watch they want to commemorate their biggest achievements with one day. There is also the older generation, including myself, who enjoy the history and heritage of our sport at these events, where older cars from former times are driven, launched or enjoyed. “As part of the Rolex family, you really understand the values of understated perfection and elegance; it’s the Rolex way, driven by a passion for innovation and excellence,” Kristensen continues. “There’s a great subtlety and unique identity to the brand. The first watch I bought was a Rolex Daytona, in 2000. I got it engraved with my victory in Le Mans that year. My favorite watch is the Rolex Daytona watch I’m wearing today. It is engraved with the legend ‘Nine-Time Winner.’ The watch is unique and reflects an understated elegance, so it is a huge honor to wear it. The Rolex Daytona represents the qualities that drivers strive for—to be accurate, consistent and durable— values which I aspired to when I was racing.”

Considered the greatest tennis player of all time, Roger Federer is a member of the Rolex family. “Like everyone else, I think of Rolex as an unbelievable watch brand,” he told Revolution co-founder Wei Koh. “It’s the watch you want to have if you’ve worked hard in your job and want to give yourself a nice present. (Read the entire article here)

“One quality that you don’t see very often today is loyalty, and I love the loyalty that people at Rolex have for their brand,” Federer continued. “Then I love the designs of the watches—they are absolutely timeless. I like the detail and the craft that goes into the Swiss watch industry in general, but Rolex is clearly my favorite. For me, every time I put on a new Rolex I feel that I’m happy I have two boys because we will be able to share these watches one day.” 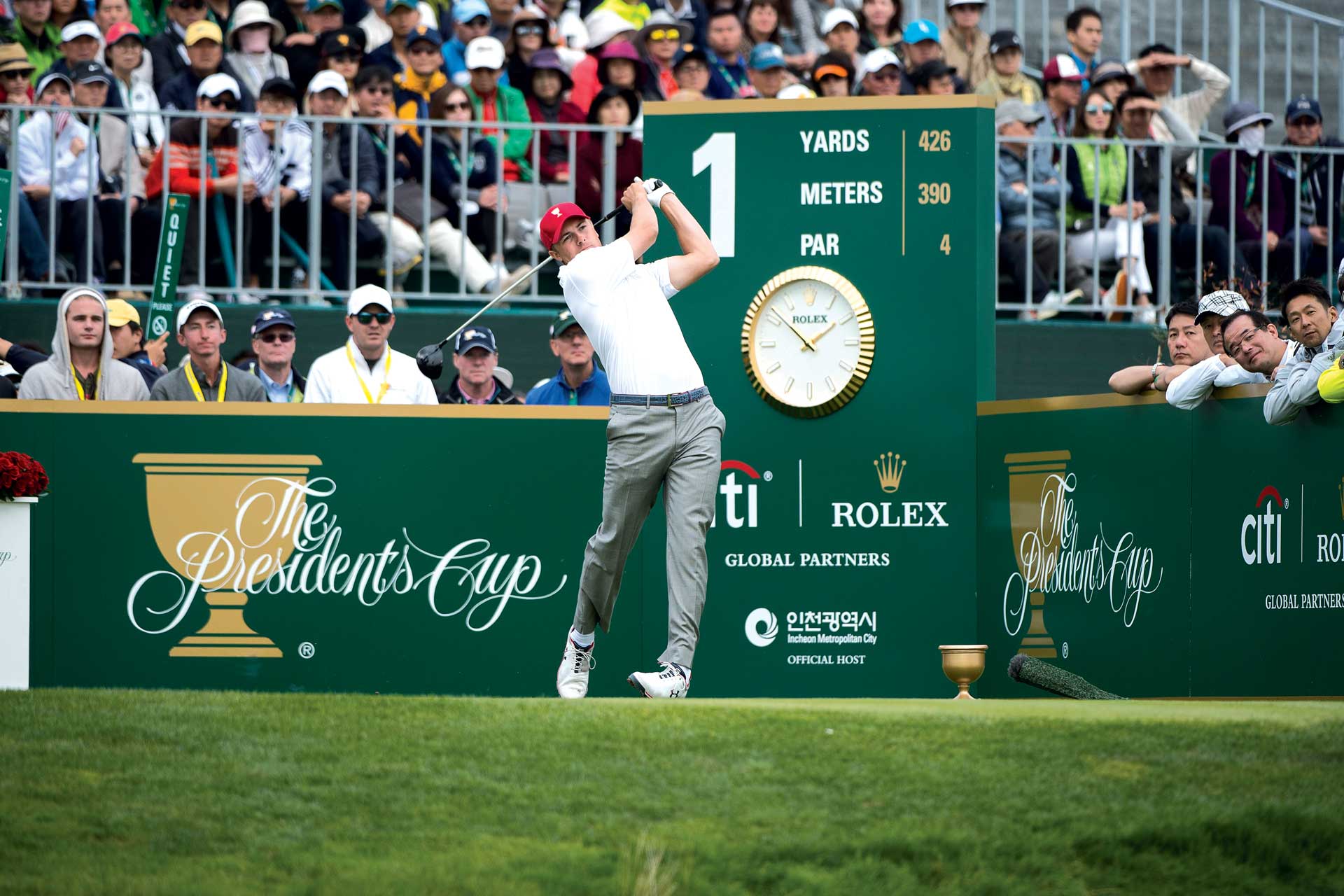 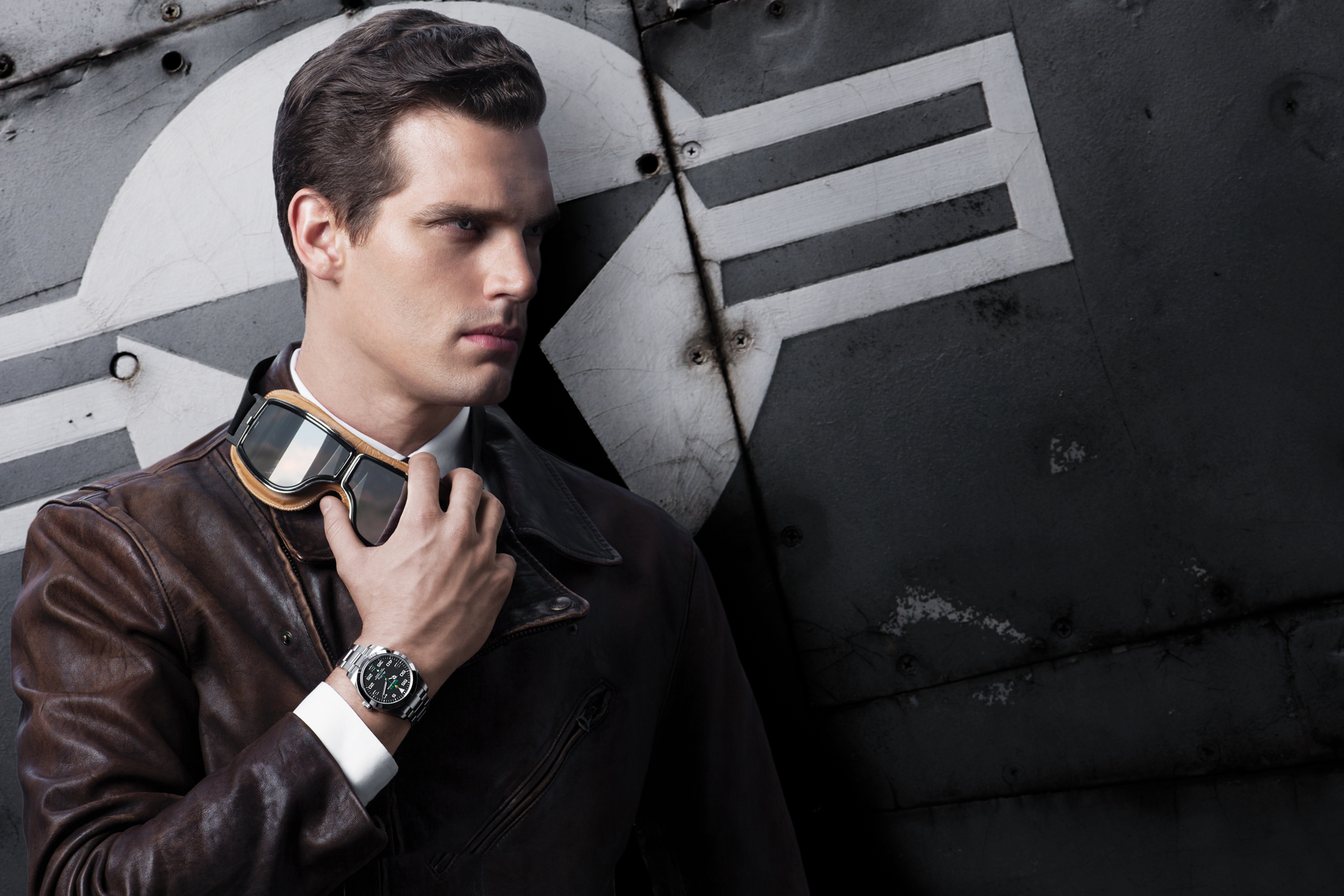 This year saw some great new watches introduced at Baselworld. The watch featured on the top of the page here is the Oyster Perpetual Air-King, a watch that harks back to the glory days of aviation, and its design details underscore this masterfully. Launched in the 1950s, the new, larger 40mm Air-King has a unique black dial featuring large hour markers (at three, six and nine) and a prominent minute scale for navigational time readings. The Air-King written on the dial is in the same font as the original model. Water resistant to 100 meters, the Air-King is housed in a 904L steel Oyster Perpetual case and also undergoes the Superlative Chronometer Certification process.

Rolex was very active during aviation’s Golden Age and the original Air-King, as well as this reintroduced model, both pay homage to the pioneers of flight and the brand’s role as critical timekeeper in an era where an accurate watch was imperative.

One of the pioneers of this era, Charles Douglas Barnard, an English aviator who set a number of flight records, said of the Oyster, “The peculiar qualities of this Rolex watch render it eminently suitable for flying purposes, and I propose to use it on all my long-distance flights in the future.” In 1933, Oyster watches were with the Houston Expedition as it made the first-ever flight over Mount Everest at an altitude exceeding 10,000 meters (33,000 feet) in extreme weather conditions. In 1934, Owen Cathcart-Jones and Ken Waller set a record for the return voyage from London to Melbourne (Australia) with a twin-engine De Havilland Comet, using a Rolex Oyster as their on-board chronometer.

In keeping with its pilot watch origins, the new Air-King is fitted with the Twinlock double waterproof system, with the winding crown screwing down against the case, and it is also fitted with a shield against magnetic fields. Chances are you’ve already heard about the new 904L steel Oyster Perpetual Cosmograph Daytona, which has already become the most sought-after reference in the watch world. Fitted with a Monobloc Cerachrom bezel in black ceramic, the watch is reminiscent of the 1965 model that was fitted with a black Plexiglas bezel insert. The Cosmograph Daytona was first introduced in 1963 and is arguably the most well known chronograph in the world. The bezel, engraved with its tachymeter scale (to measure speed over a fixed distance), has been made even more legible with the use of platinum PVD in the numerals and graduations. The Cosmograph Daytona is powered by the completely in-house Rolex automatic caliber 4130. The movement is COSC-certified and also undergoes the new Rolex Superlative Chronometer Certification. 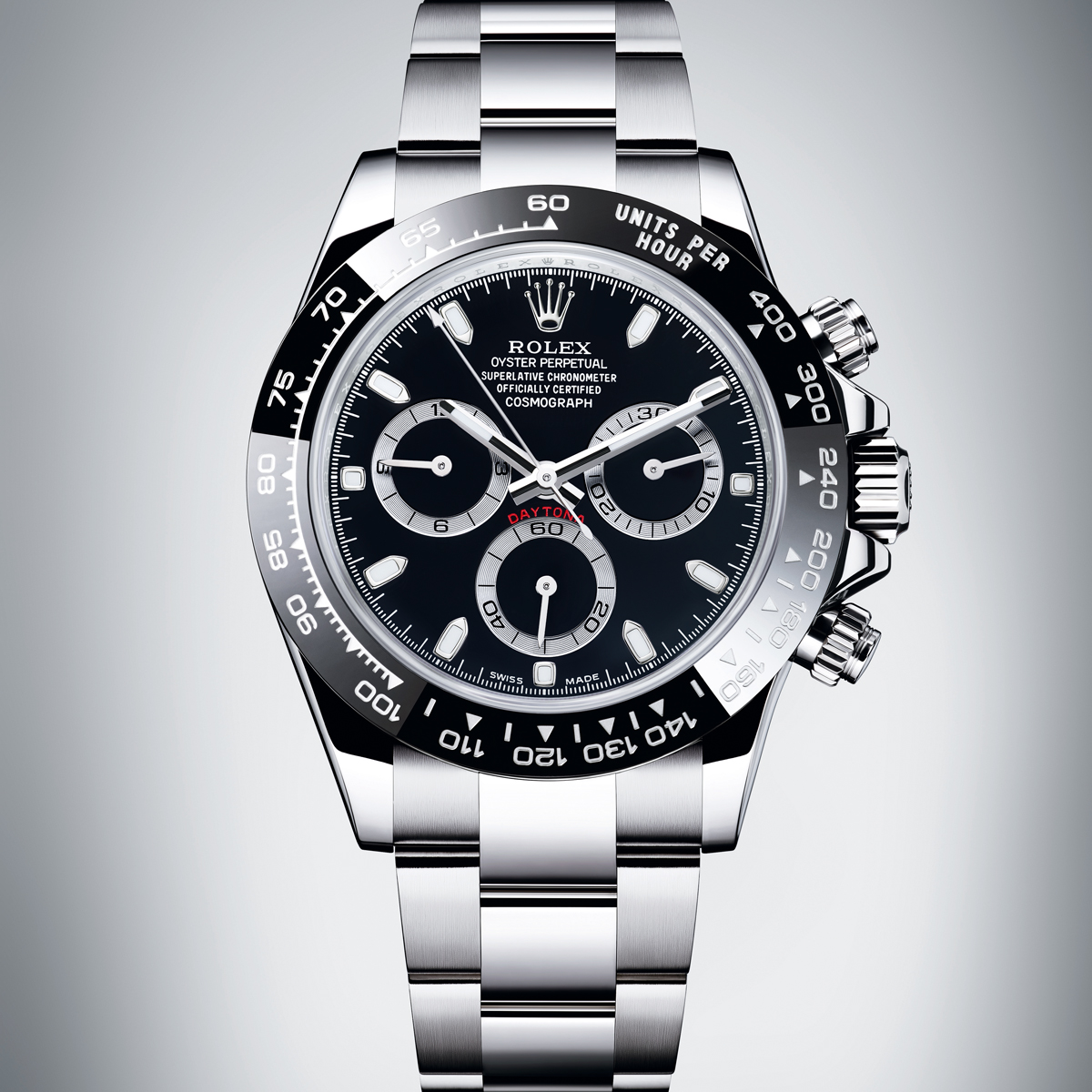 The Oyster Perpetual Datejust 41 is a new iteration of the iconic two-tone Rolex everyone knows and loves—the original was launched in 1945. This version has an updated design and comes in a 41mm case, available in 904L steel and either 18K yellow or Everose gold and a large choice of dials. The new Datejust 41 is powered by caliber 3235, which carries the new Superlative Chronometer certification. This timepiece comes on either an Oyster or Jubilee bracelet, both of which feature the Rolex-patented Easylink system, which allows the wearer to increase the bracelet length by 5mm for increased comfort.

In addition, this year Rolex introduced the Oyster Perpetual Lady Datejust 28, with the case redesigned and enlarged to 28mm. The automatic movement powering this model is the 2236, which features the Syloxi silicon hairspring and Superlative Chronometer certificate. Water resistant to 100 meters, the new Lady Datejust 28 features the Twinlock double waterproofness system, with a screw down winding crown.

The new Oyster Perpetual Explorer boasts a new luminescent Chromalight display, with blue luminescence in the numerals to match the hour markers and hands. Originally introduced to honor Sir Edmund Hillary’s successful summit of Everest (8,848 meters) in 1953, the Explorer has been in Rolex’s collection ever since. Featuring caliber 3132, a Superlative Chronometer certified movement; the Explorer features the blue Parachrom hairspring and Paraflex shock observers, unique to Rolex, which provide 50 percent greater resistance to shocks. The Explorer comes on a solid-link Oyster bracelet fitted with the Easylink rapid extension system.

Rolex, just by virtue of its legendary name, could do nothing and probably sell watches until the end of time. But, the brand continues to innovate, pushing the boundaries of materials and movements, testing and water tightness to the limits, all with the goal of producing the best and most reliable timepieces on the face of the Earth.

Well done, Rolex, and Happy Anniversary to the Oyster. 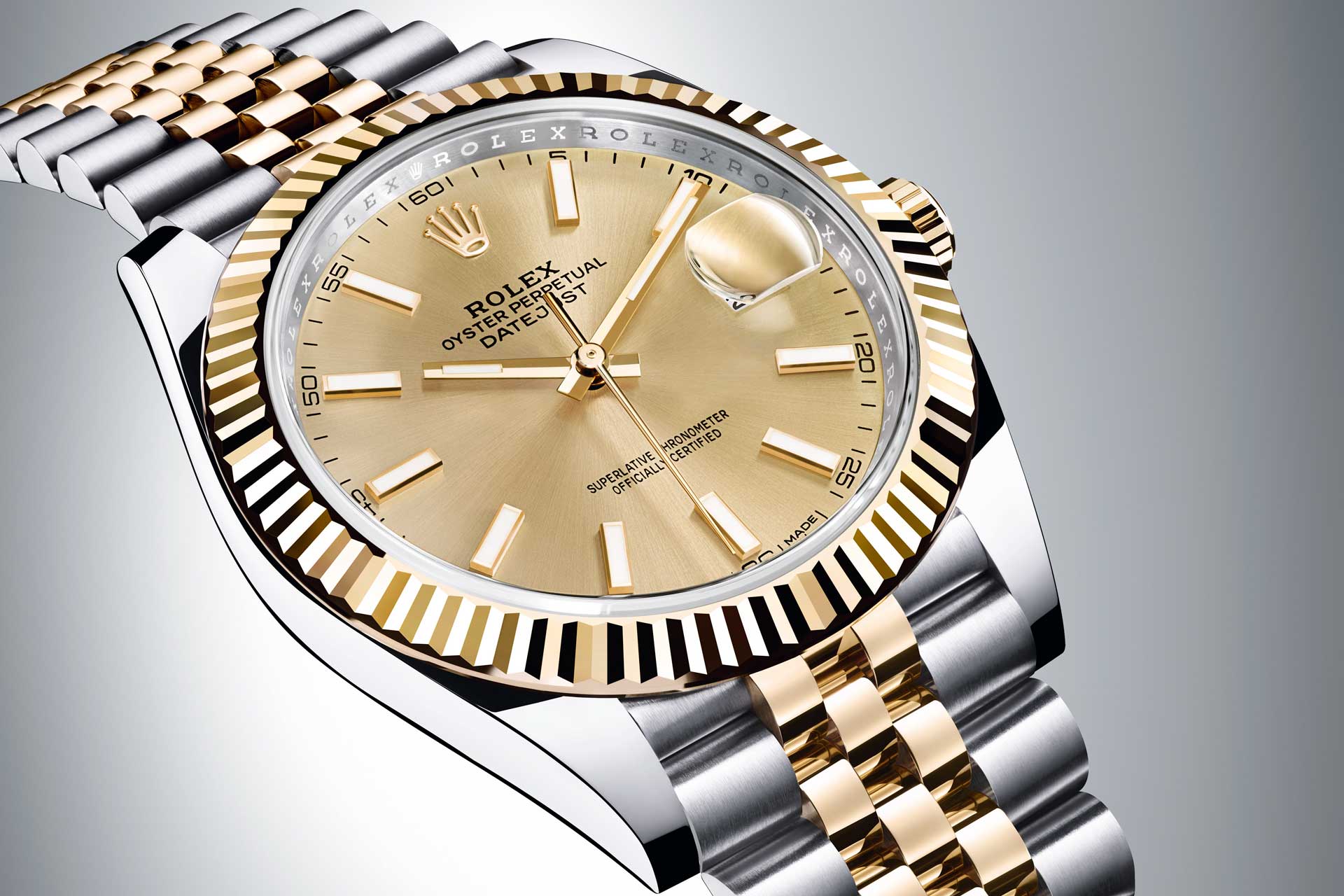