To quote Friedrich Nietzsche: “When you gaze long into an abyss, the abyss also gazes into you.” Now I don’t typically get philosophical when I’m diving; there’s too much else to pay attention to, like time, depth and remaining air. But hovering over 8,000m of indigo water is enough to give even the least introspective man pause. All that kept me hanging there, on the lip of the Cayman Trench, was a litre or so of air in my buoyancy vest.

I was, for all intents and purposes, an astronaut floating in deep space without a tether to his craft. In my case, that craft was a diving boat 35m above me. Once I came to grips with this thought, a sense of calm set in, perhaps tinged with a hint of nitrogen narcosis. Diving will do that to you. The trivialities of topside life fade and you become one with the ocean, your saline blood nearly identical to the seawater, akin to returning to the womb or to some primordial state when we all had gills. Diving suspends or perhaps transcends time, yet it is ruled by time, and my deep thoughts were interrupted by a glance at my wrist. The Tudor Submariner on my wrist indicated a bottom time of 30 minutes and I needed to start my ascent lest I indeed became one with the sea.

Watch collectors prize vintage Rolex and Tudor diving watches not only for their purity of form, their modern wearability and their value, but also because their robustness makes them suitable for daily wear. However, most people will draw the line at using these watches for their original intended purpose – diving with a 40-year-old watch is simply too risky they say, and bringing it back up to its original specifications would compromise its “as found” charm. But upon acquiring a Tudor Submariner, reference 9401/0, dating to 1976, I decided to swim against the current and have the watch overhauled to restore its original water resistance with an eye on diving with it in the Cayman Islands.

The rise of the Tudors

The Tudor watch company was founded by Rolex patriarch Hans Wilsdorf with the charter of being a more affordable alternative without giving up anything to quality. This mandate still holds true for Tudor today but compared to the Tudor of the 1950s, 1960s and 1970s, the brand of 2015 is a distinctive company charting a more independent course, with youthful designs and a new in-house calibre to call its own. In the past, Tudor shared much more with its parent company, many of the watches virtual clones of similarly named Rolexes but with outsourced movements inside. This was hardly a bad thing, as Rolex made some of the most robust watches available and were well-suited for the activities for which people used them, particularly the Submariner.

After two days of diving shallow reefs and wrecks festooned with coral, schools of fat tarpon and one friendly nurse shark, I left busy Grand Cayman behind and boarded a Twin Otter turboprop for the 20-minute flight to tiny scrub of fossilised coral that is Little Cayman. Fewer than 100 people live on the island, most of them divemasters, herpetologists, birdwatchers and eccentric expats. Barely 20 miles long and only a mile wide, Little Cayman is known for its endemic iguana population, a colony of brown-footed boobies and not much else. But just offshore is some of the best wall diving in the world, due to the proximity to the Cayman Trench. Heading for the depths

With the wind whipping up four-foot swells on the north side, we tied in to a mooring line off the western tip of the island. Suiting up was a challenge, with the boat bucking up and down on the rollers. I puffed into my regulator, spit in my mask and then double-checked the fold-over safety catch on the Tudor’s steel bracelet. It’s a testament to Tudor’s enduring success and design that even the more modern Rolex bracelet that I mounted to the Submariner fit perfectly, its tinny clasp, fold-out dive extension and rattly links the same as the one probably attached to this watch when it was sold new in the mid-1970s. I shuffled to the transom and stepped straight into the sea.

The Rolex Submariner has always been an eminently capable diving watch, leading to its selection by various nations’ navies as standard equipment for their underwater cadres. But by the early 1970s, the watch transcended its original design brief to become something of a luxury status symbol. Its price also placed it outside the budgets of many divers who may not have wanted to bang up a watch worth two months’ salary. For this reason, the Tudor Submariner became a better alternative – a rugged timepiece that could stand up to the rigours of wet work while still leaving money in the bank for flights to the tropics. In the days before the digital dive computer, a watch was a necessary piece of kit, providing the vital time reference that was needed to ward off a nasty case of the bends. Diving without a watch wasn’t an option. So many of the Submariners that saw dive duty bore the Tudor shield instead of the Rolex crown.

With vintage Rolex pricing at stratospheric levels and Tudor’s recent design winning streak, there’s renewed interest in the vintage references on which the brand made its name – the Monte Carlo chronograph of the early-1970s, the Advisor of the 1950s and of course, the Submariner. Few of the latter are as coveted by collectors as those produced from 1969 through to about 1977, which differentiated themselves by the addition of square dial markers and blocky hands that earned the watch the nickname, “Snowflake”.

It was this version of the Submariner that was procured for use by France’s elite military diving unit, the Marine Nationale, in both blue and black dial variants. The watch was well-suited for rough duty, with its legendary Oyster case, Triplock screw-in crown, high-domed shatterproof acrylic crystal and a proven, rugged ETA 2776 self-winding movement ticking inside. It was this watch, the reference 9401/0, that I had on my wrist diving over the wall on Little Cayman.

Descending below the roiling surface revealed a markedly different scene. Endless visibility revealed a turquoise universe and below me lay an expanse of brilliantly white sand that made me squint behind my mask. As I approached the sea floor, a stingray, spooked by my fins and noisy exhalations, burst from the sand and flapped away, shadowed by a companion scavenger fish. In the near distance, I could see the sand sloping down away from me into the Trench, interrupted by fingers of coral that disappeared into darkness below, like a giant hand clawing for purchase on the edge of a cliff. I drifted down – 10m, 20m, 30m – until I followed one of the channels between the coral down to the lip of the wall. Small colourful fish huddled among the bright tubes and fans, in stark contrast to the endless and empty blue just beyond with its unseen schools of predatory pelagics. 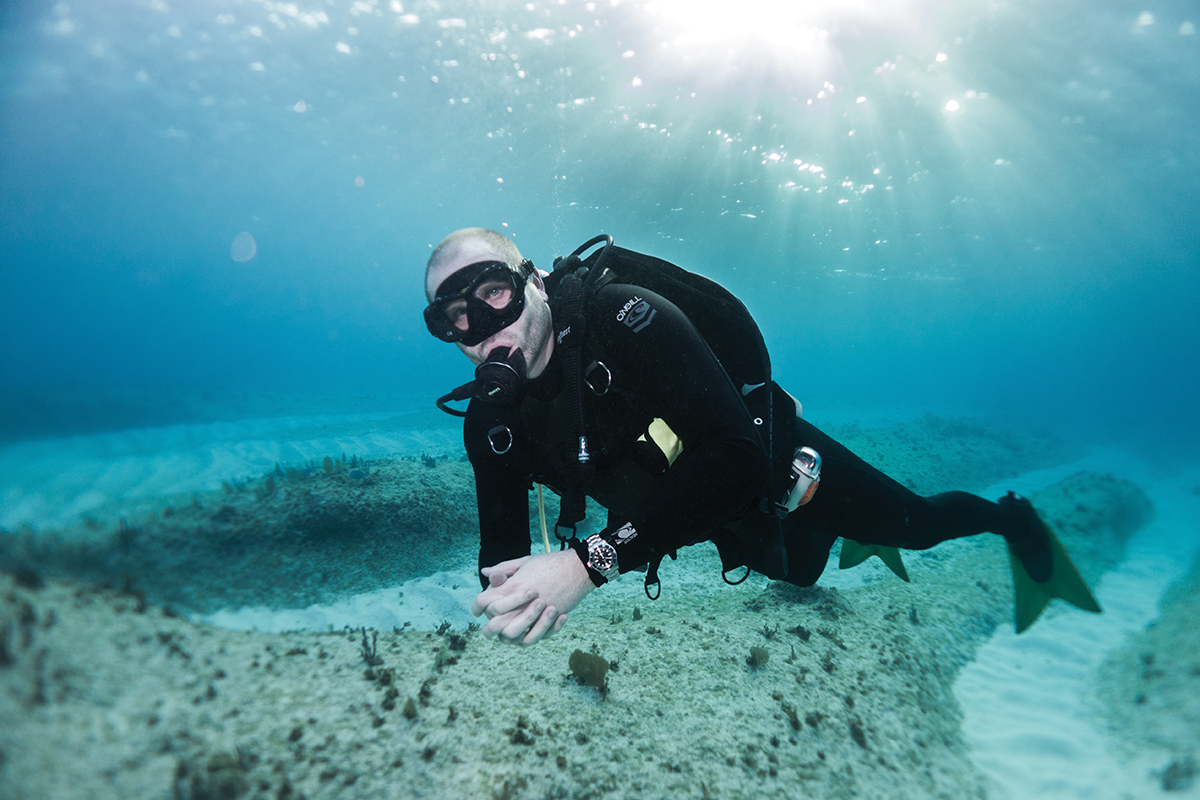 When I acquired the old Submariner, it was in rough shape. The bezel was frozen in place, the crown didn’t screw in all the way and the mainspring was broken so it didn’t hold power. Clearly, this watch had seen an interesting life of hard use (like me, I like to think). The full service it required would cure the watch’s immediate issues but I had to decide how far to go with it. To make it water resistant enough to dive necessitated a new crystal, crown tube and new Rolex Triplock crown, all of which would render it less desirable in the eyes of a collector. But in my eyes, this was an opportunity to return this legendary diving tool to its original specification and the chance to dive with a piece of history outweighed any desire to preserve its resale value. A watch like this doesn’t deserve to languish in a safe.

Diving with a Submariner from an era when it was still a legitimate piece of diving kit was a chance to see for myself what made it so good in the first place. The traits that collectors prize the Submariner for its perfect dimensions, legible dial, robust build – are what still make it such a superb diving instrument. Even with its tritium lume well past its half-life, those blocky hands and markers against a matte black dial left no doubt as to my bottom time. The bezel, a non-ratcheting bi-directional one, was easy to grip and stayed in place when set. And the steel bracelet was comfortable and adjustable, perfect for use over a wetsuit sleeve.

Submariner, whether Rolex or Tudor, is one watch whose design was near perfect from its genesis and required little revision for over 50 years. Now, with a 40-year-old one on my wrist 30m deep in the Caribbean, I could appreciate the other thing that makes vintage Submariners so desirable: the intangible panache of its adventurous heritage. Only now I was adding to that.

At around 35m deep, I reached the edge of the wall. Sand poured over the side in slow motion, as if being sucked into a vast black hole. I kicked out over the edge and puffed an extra bit of air into my buoyancy vest for reassurance. I was floating out over one of the deepest troughs in the world’s oceans. There was a sense of beauty and danger all at once, the true essence of adventure. I glanced at my wrist and the Tudor strapped to it and wondered how many adventures this watch had been a part of in its 40 years. Had it timed dives for an intrepid explorer, chasing stingrays and hovering over steep walls, and other adventures I’ll never know about? Perhaps it had even been in these same Caribbean waters. I would like to think so.

This is the beauty of these timepieces; they are not mere baubles to be bid upon, paraded on Instagram and then hidden away in a safe deposit box. To use them is to honour their heritage, their design and their capability –not only as symbols of past adventures, but companions for future ones. But now was not the time for philosophising. I had gazed into the abyss long enough. It was time to swim back up to the daylight a long ways above.