Introducing the URWERK UR-100 SpaceTime

The first thing we recognize when we look at URWERK’s latest is that the timepiece breaks what we’ve come to know as master watchmaker, Felix Baumgartner and chief designer Martin Frei’s signature case shape.

Instead the UR-100 takes on a case shape that calls back to URWERK’s first two creations, the UR-101 and UR-102. Of course, the silhouette of the case is where the nostalgia ends. Because the UR-100 case design is very much in line with URWERK’s 21st century raw, industrial look today.

The UR-100 also lacks the shroud of its predecessors. Instead the UR-100 has a pronounced, domed sapphire crystal that give way to a clear unadulterated view into the orbital satellite mechanism developed for the timepiece.

The mechanism in this case is the self-winding UR 12.01, which in typical URWERK fashion, indicates the time with the orbital satellite hours that sweep across the minute scale towards the 6 o’clock position of the watch.

Have a closer look at the dial’s 10 and 2 o’clock and you’ll see that the watch has two further sub-indications. This is where the watch gets the SpaceTime part of its name.

The orbital hour hands pass through these sub-indications to give two forms of information. The scale at 10 o’clock tracks an approximation of the distance the earth covers as it spins on its axis, an average speed of 555 km per 20 minutes.

The scale at 2 o’clock tracks the approximate distance the earth covers as it orbits the sun: a very rough, average speed of 35,740 km per 20 minutes.

The idea behind these unheard-of indications came to Felix thanks to a nineteenth-century pendulum clock his father had gifted to him. The clock was made for the 1893 World’s Fair in Chicago by a watchmaker named Gustave Sandoz.

The clock has a regulator dial. The scale around the perimeter of the clock face is in 100 km increments, over which the central hand moves 500 km every time it ticks, measuring out 500 km moved by the earth at its equator, as it spins on its axis.

The extra-long pendulum that regulates the clock makes a swing every 2.16 seconds.

UR 12.01 with self-winding system governed by low-profile turbine minimizing over-winding and wear; hours and minutes; distance traveled on earth’s equator in 20 minutes, distance earth travels around the sun in 20 minutes; 48-hour power reserve 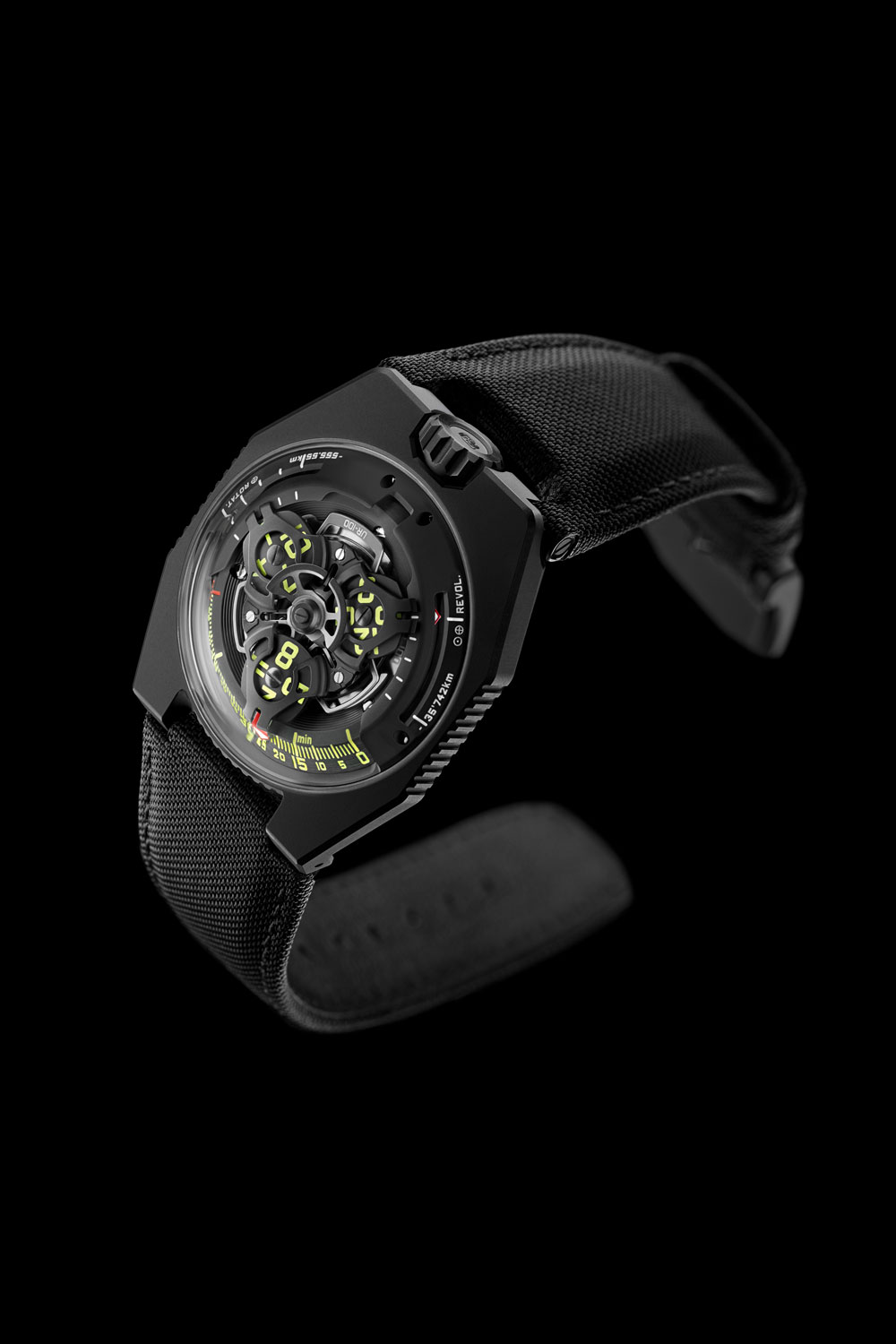