Newsflash: Revolution’s Ross Povey has a secret life away from the glamorous world of luxury watches. When not consulting or writing about vintage timepieces, Povey, along with his two brothers, works in a secondary school in the North-West of England. Today a successful and nurturing institution, it has required a decade of hard work by teachers, parents, the local community and, of course, pupils, to take what was “the worst school in Britain” to where it is now.

Sadly, as well as taking on a neglected and failing educational establishment, Povey et al also inherited more than £1 million of debt. But, against the odds, Harrop Fold has developed into a centre of pride and inspiration to other schools in a similar position. Now, to help spread its story of success – as well as to help reduce its deficit – Harrop Fold has agreed to be filmed for a Channel 4 TV show. The first of the eight episodes will air on Thursday 31 August, with successive shows being broadcast over the next two months.

On the eve of Educating Greater Manchester, Revolution asks Povey about his double-life.

Ross, Revolution readers know you as Mr Tudor – collector and expert on all-things Tudor and Rolex. Tell us about your “other life”.

In my other life, I’m not Mr Tudor but Mr Povey! I am the head teacher of an 800-pupil secondary school in Salford: Harrop Fold School. At home my wife and I have three children – an eight-year-old, a six-year-old and an 18-month-old. So, I’m very busy.

You and Harrop Fold are about to become TV stars when Educating Greater Manchester hits screens on 31 August. How did the show come about and what were the reasons behind it?

Harrop Fold has an interesting and exciting backstory. It hasn’t always been plain sailing, but we have built a school that we are extremely proud of and when we were offered the opportunity to share our story with the nation… well we just couldn’t say “no”.

What do you hope to gain through Educating Greater Manchester in the long-term?

Harrop Fold School is in an area of Salford called Little Hulton. It is one of the most deprived and overlooked areas of the UK. Decisions have been made, over the years, that I believe have disadvantaged our young people and wider community and we need to raise awareness of this amazing school that is being held back. The school has a huge legacy deficit that none of the current leadership team created. Due to this we are under-staffed, under-resourced and unable to move forward in the way that wish to. The television documentary will hopefully highlight the amazing work that everyone involved does under these circumstances.

The school has been transformed in the past 15 years. Who was involved in making this happen and what was the process?

The workings of a school are very much like the movement of a watch. One of my favourite watches is a blue Tudor “Snowflake” Submariner. I love the faded bezel, patina on the dial and hands and the unpolished case profile. The watch is so much more than this, though, and when you remove the caseback you can see the complexities of the calibre – all the jewels, wheels and workings.

The caseback has service markings of the people who have worked on it over the decades, then you have to consider the designers, research and development teams, advertising teams – it took a lot of people to get that watch on my wrist. It took teams of people, and that’s what our school is: TEAM Harrop.  As you walk into the school we have a banner that says, “Team Harrop Welcomes You”. This encapsulates the culture that has helped us overcome being deemed the worst school in the UK in 2005 with the biggest debt. Everybody has a role to play – each person is a cog, a balance spring, a spring bar or a date wheel. All vital, and all key ingredients in making it work. Our dedicated team of teachers, admin staff, caretakers, governors, teaching assistants, student development workers, community members and of course the students themselves all make Team Harrop the amazing place it is.

Your brothers and you are incredibly passionate about education for all. How did this sense of fairness and equality develop in you?

We all came from the same background but had very different educational experiences. We all share the view that a high-quality education should be available for all, regardless of whatever barriers people face.

How did the three of you end up in the same school and are there any other Povey siblings to watch out for?

I arrived first in 2004 and was employed by the fifth head teacher the school had had in two years. It was a crazy place that lacked systems and structures to enable the students to learn (remember it was deemed the worst school in the country at this point). My brother Drew was a behavior specialist in another school and he had just won a national teaching award. During a visit to the school’s Christmas concert, Drew got talking to the then head who offered him a job. A year or so later the same head employed my youngest brother Ben, who came from a therapeutic care background. There are no other siblings, but there are an emerging generation of “Povelets” who might choose to follow in their dads’ footsteps… watch out!

How did your interest in watches develop, especially in Tudor?

I was a university lecturer and freelance musician in London in the early-2000s. When I met my wife, I made the move back up to the north of England and with my last pay cheque from the university I wanted to buy a Rolex. I bought an Air King (with what has turned out to be one of the rarest dial variants – my wife picked it out) and it started there. I began working as a moderator on the Vintage Rolex Market and discovered vintage Tudors and became hooked. This was at a time when Tudor was still relatively undiscovered and people thought I was mad. They don’t think that now, though. Tudor is booming.

How do the worlds of watches and teaching fit together for you? Do they collide or slot in well together?

From a big-picture perspective I believe there is a huge similarity between the two as they are both about investment. Vintage watches are a great investment (if bought wisely) and education is all about investing in students and their future. On a practical level there have been some great opportunities for Team Harrop through contacts in the watch world. I was at a Tudor dinner in London one evening and began talking with one of the Senior Directors of Exposure PR, who were, at the time, working with Tudor UK. He was captivated by the Harrop Fold story and it ultimately led to the company working on a pro bono basis for the school. This has been amazing and was key to us deciding to do the television series.

In an ideal world, how could the watch industry get involved with Harrop Fold?

Team Harrop is focused on enlisting support from as many influencers as possible. For too long now, as a result of the debt that we inherited, the young people of our community have been disadvantaged. There is great power in people and a collective spirit. We hope when people see the television documentary they might feel compelled to get involved in some way.

There is a similarity between the Harrop and the Tudor story. Tudor went through what I refer to as its “wilderness years”, where people no longer wanted the watches and it struggled to appeal to the market. Now it has been given a new lease of life and is one of the strongest brands in the world. Harrop Fold is on that phoenix-rising-from-the-ashes journey now and Team Harrop has taken the school to a new level where we are over-subscribed and have a world-class culture for staff and students. We just need to flatten the debt. We’ve paid back around £1.5 million over the past seven years but all repayments have to come from money that should be spent on the students. That’s not fair and we need to highlight the injustice.

Were there any particularly memorable or scary moments during filming?

Imagine being filmed constantly for 12 weeks and being wired with a microphone. The scariest moments were in the first two days when I looked out across the school during lunchtime and realised every conversation and action could be caught on camera – and that was just the staff! There were a few narrowly-missed scary moments when Drew or I reminded each other to remove our mics before loo trips!

Are you pleased with how the programme has turned out?

Yes. We’ve only seen three episodes of the eight so far, but what we have seen is brilliant. We are so proud of the school and all the staff and students and can’t wait for the nation to be proud of them, too. 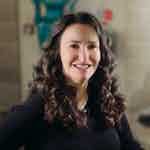