“When you come to see a picture of mine, I want you to know that I’m not going to do anything that will make you uncomfortable. I want you to know that you won’t be disappointed in me.” So said John “Duke” Wayne (1907-1979), star of 142 patriotic 20th-century “War and Western” Hollywood movies. Only Clark Gable beat Wayne at the box office. His languid, low, testosterone-fuelled drawl, rolling gait and weather-beaten face as chiselled as Mount Rushmore made Wayne America’s most iconic hero of the Wild West.

Born Marion Morrison, he earned he nickname “Duke” as a child. The family had a dog called Big Duke, and when local firefighters saw a young Wayne running after the dog, they named them Big Duke and Little Duke.

Wayne won a football scholarship to the University of Southern California and, when a bodysurfing injury forced him to leave, took up work as a props man for the Fox Film Corporation. Befriending director John Ford, Wayne was put in front of the camera playing bit parts. Director Raoul Walsh cast him in his first leading role in the 1930 film The Big Trail, but it was Ford who directed his friend to a starring role as the Ringo Kid in Stagecoach (1939). Ford predicted: “He’ll be the biggest star ever.”

Wayne was self-depreciating about the craft of film acting. In later life, he gave Michael Caine this advice: “Talk low, talk slow and don’t say too fucking much.” When he finally won his only Academy Award for True Grit (1969), Wayne whispered to Barbra Streisand: “Beginner’s luck.” He later got drunk with Richard Burton who, he declared, should have won Best Actor for Anne of the Thousand Days.

He even found humour in Howard Hughes’s prize turkey The Conqueror (1956) for which Wayne’s skin was yellowed and eyes scotch taped into a slant to play Genghis Khan, quoting a reviewer who said: “Not even a dental hygienist could find authentic Tartar in this movie.”

Doing It His Way

Wayne was an actor who made pictures his way. He would never take on a script he considered unpatriotic and refused point blank to film a scene where he was scripted to shoot a man in the back. A life-long Republican, Wayne was a crusader against Communism in Hollywood and was a staunch supporter of the Vietnam War. But he was not a stereotypical Republican bigot. Of his friend Rock Hudson, Wayne said bluntly: “Who the hell cares if he’s queer? The man plays great chess.” The Duke’s pleasures were simple: sailing his 136ft yacht The Wild Goose, smoking five packs of unfiltered Camel cigarettes per day, drinking neat tequila on ice and playing competitive bridge, poker and chess.

The Duke owned several watches, though his most important timepiece was one of the limited edition of 1,000 Gérald Genta-designed, yellow-gold Rolex King Midas models that were the most expensive and the heaviest made by Rolex from 1964. The King Midas – variants of which were also worn by Elvis Presley and Christopher Lee as Bond villain Scaramanga in The Man with the Golden Gun – was auctioned with an estimate of $6-8,000 and sold for $26,290 at Heritage Auctions in 2011. Typically for the Duke, who disliked ostentation, Wayne always wore his watches with the face resting on the inside of his wrist. In the 1950s, he was photographed wearing a square yellow-gold watch with a tan leather bracelet (shown above), the case manufactured by Roy and the movement by Elgin. The face was monogrammed Duke and curiously each numeral read 5PM. The timepiece was obviously an in-joke but, unfortunately, the punchline has gone to the grave with Wayne.

Conforming to the Hollywood stereotype, Wayne married three times and had seven children as well as enjoying long-term affairs with Marlene Dietrich and Merle Oberon. But the Duke did not indulge in the usual trappings of a movie star, preferring a more modest life at his house in Newport Beach, California, and his cattle ranch in Arizona. The man who said “nobody should come to the movies unless he believes in heroes,” lived the American Dream of the great outdoors both on and off screen. Standing six feet four, he was the embodiment of American masculinity, which made the removal of his lung in 1964 such a shock to his fans. Wayne was said to be the man who coined the phrase “The Big C” for the cancer that would eventually kill him in 1979. A year before his death, Wayne was gifted a circular yellow-gold Piaget watch engraved on the caseback, “From your friends Shreveport LA. Thank You. Independence Bowl 1978”, presumably to celebrate the East Carolina Pirates winning the annual collegiate American Football tournament. He was posthumously awarded the Congressional Gold Medal and will be remembered as Hollywood’s most famous cowboy who lived by his own maxim: “Courage is being scared to death… and saddling-up anyway.” 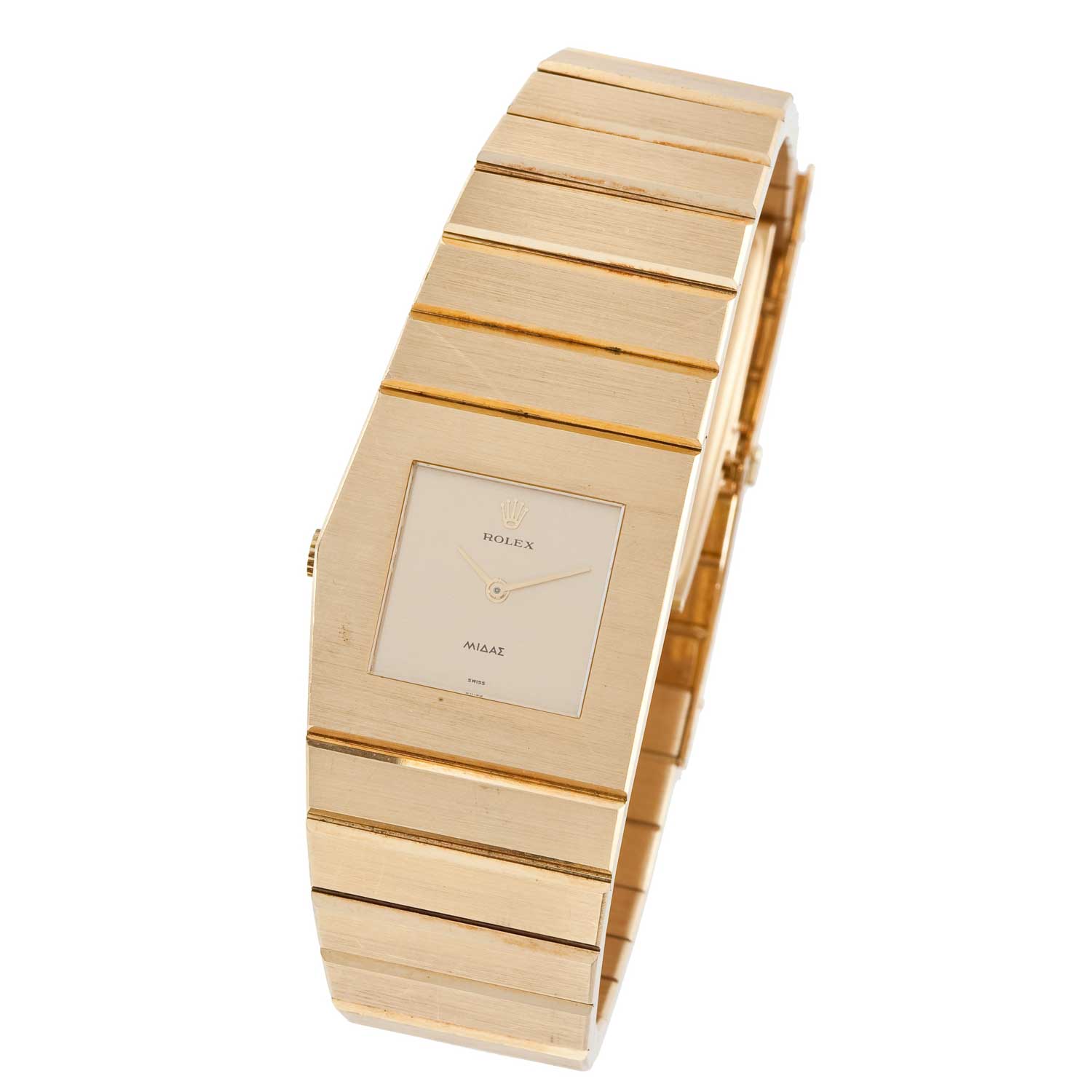